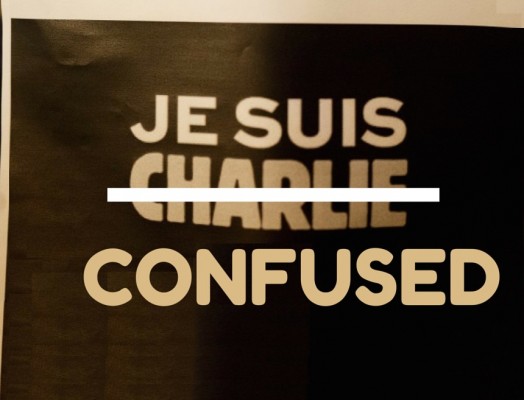 (January 29, 2015) – “I am only trying to make people laugh,” says Dieudonne M’bala M’bala. He was referring to his Facebook update: “Tonight, as far as I am concerned, I feel like Charlie Coulibaly.”

The comedian was mixing up “Je Suis Charlie” with Amedy Coulibaly, an alleged terrorist. Clearly not amused, the French arrested him and 53 others last week for being an “apologist for terrorism” or hate.

Such restrictions are more common than most of us think. In fact in 2012, a British teen was sent to jail for his Facebook update celebrating the deaths of British soldiers.

As distasteful as these may be, neither constituted a “threat” or a violent act. As blogger Robert Sharpe rhetorically asked; is the sacredness attached to soldiers in the West any more worthy of protection than those attached to Islamic icons?

The Paris tragedy has reignited global interest in an old debate.

Every society places limits on speech, by law or through social disapprobation, or both. In fact, even Charlie Hebdo has restricted speech.

Throughout Europe, there is legislation specifically limiting speech in the context of the Holocaust. Denial is a punishable offence in at least 17 countries with jail sentences of up to five years. Some of these laws even forbid any expression that “minimises”, “trivialises”, “belittles”, “plays down”, “contests” or “puts in doubt” Nazi crimes. In Hungary, Poland and the Czech Republic, laws extend this prohibition to communist atrocities.

Moreover, the European Union’s Framework Decision on Racism and Xenophobia provides that denying or grossly trivialising “crimes of genocide” should be made “punishable in all EU Member States”. Twenty-seven EU members have incorporated this into domestic legislation.

Motivation and incitement to hate are often deemed outright illegal in many western nations, including Canada.

Even in jurisdictions with liberal speech laws, incitement to hatred against identifiable groups is illegal. Anti-religious hate speech, in particular, is also illegal in many nations.

Moreover, blasphemy is still on the books in many nations, including about a dozen European states (Ireland enacted legislation in 2009). As recently as October 29, 2012, the Supreme Court of Poland ruled against Adam Darski, who tore up a copy of the Bible on stage in 2007. A lower court found him guilty of “intentionally insulting the Holy Bible” (an appeals court dismissed it for limitations issues).

Interestingly, even the European Court of Human Rights (ECtHR) has approved regulation of anti-religious speech. In 1994, in Otto Preminger versus Austria, the ECtHR upheld Austria’s banning, under its blasphemy laws, of a satirical film that mocked Christian religious beliefs.

Given the high percentage of Catholics in the town the ECtHR deferred to the national authorities “to ensure religious peace in that region” so that people shouldn’t “feel the object of attacks on their religious beliefs in an unwarranted and offensive manner”.

More generally, the European Convention on Human Rights (ECHR), while protecting the right to “freedom of expression”, recognises that its exercise is limited by justifications “necessary in a democratic society” and to maintain public order.

Why are Muslims expected to have tougher skin? (No I am not justifying murder in response, I have critiqued blasphemy laws as applied in the Muslim world and elsewhere. And yes, I condemn terrorism.)

Minimising Muslim sensibilities is all the more hypocritical given the growing Islamophobia, which many consider the new anti-Semitism.

It is not about criticism of Islam, but what Burak Erdenir calls the “new racism” of “Muslimophobia”, which “targets cultures, lifestyles and physical appearances of Muslims.”

He notes that “identity, to a great extent, is about perceptions … and thus one cannot simply disengage from one’s faith group by renouncing the religion”. Erdenir compares this to anti-Semitism in the way “prejudice and discrimination against an outside group” rests on “a combination of religious and ethnic terms.”

Indeed as Tariq Modood and others have argued, such depictions must be seen in light of the growing racism in Europe. It is not about mere offensiveness, but a history of demonisation, marginalisation, vilification and the resulting targeting of the community.

Secular liberals who argue that the right to blaspheme is essential to liberty, are wilfully blind. They have their own sacred cows. As Peter Liethart points out “we are awash in sacred entities and ideas – equality, freedom, and rights. Modern nations are holy nations, demanding sacrifices to police the boundaries of the sacred”.

Indeed, insulting soldiers, expressing ideas that may challenge national security, and any secular defined “truth” are all restricted. Even in the US, where free speech is the most entrenched, due to First Amendment jurisprudence, there has been an escalation of the criminalisation of speech in the “war on terror”.

In fact, in 2012, a US citizen and pharmacist, Tarek Mehanna was convicted for material support of terrorism (for what he said, wrote and translated). The prosecution was not based on the Brandenberg versus Ohio standard, whereby speech can only be suppressed if it is intended and likely to produce “imminent lawless action”. Others are quickly catching on.

Violating these sacred secular symbols is akin to blasphemy. It is the epitome of arrogance to think that secular values and limits are worthy while others are not. Indeed, as Leithart argues that liberals “continuing to pretend that it recognises nothing sacred, nothing true, looks like a path towards intensified violence.”

As Mona Abul Fadl noted: “Minds fed on the myths of the dominant culture need to be provoked into rethinking their complacencies, and weaned to the idea that whatever the culture which might prevail at any given moment, there is always another possibility, an alternative to understanding and to virtue.”

Validating the other view is a sine quo non for dialogue. Until both secular and religious sacred symbols are treated equally, #JeSuisConfused.

[First published on Al Jazeera and reprinted on IQRA.ca with permission of the author].