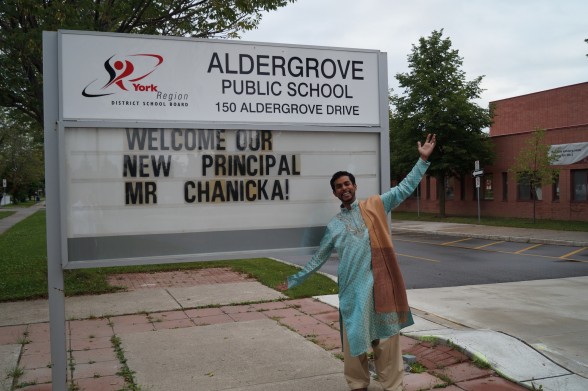 (May 11, 2015) – Jeewan Chanicka is excited and proud to be chosen as a Pan Am Torch Relay Torchbearer for the upcoming Pan Am Games set to take place in Toronto and surrounding areas this summer after being selected out of 100 volunteers and community leaders chosen by President’s Choice.

“I was surprised,” said Chanicka, who is the Principal at Aldergrove Public School in the City of Markham.

“It came about as a nomination from some staff members in the school.”

“Of course that has translated into excitement, nervousness and a sense of responsibility as it comes as part of me representing my community – over 400 families, 600+ kids – I am both humbled and honored.”

The Pan American Games are the world’s third largest international multi-sport Games, only surpassed in size and scope by the Olympic Summer Games and the Asian Games.

More than 7,000 athletes from across the Americas and Caribbean will participate in the Games that will run from July 10 to 26 to be followed by the Parapan Am Games from August 7 to 15.

Chanicka was chosen to be one of more than 100 breakfast program volunteers from across Canada representing President’s Choice in the relay for his commitment to promoting a healthy lifestyle in the school and for his community service and leadership.

“President’s Choice selected me, in part, due to my commitment to promoting healthy living and lifestyle at school and my volunteerism and community work,” said Chanicka.

“At our school, I inherited an established healthy snack program, which has since expanded to include a breakfast program.”

“We recently acquired a hydroponics tower to grow herbs and vegetables and we recently set up garden beds to begin gardening some vegetables,” he explained.

“We want students to understand how what they eat impact them and how important it is to grow their own food as well.”

Aldergrove Public School is part of the York Region District School Board which is the third largest school district in Ontario, with over 122,000 students in 174 elementary schools and 32 secondary schools.

Having their Principal being selected as a torchbearer has raised the profile of the Markham school.

“At Aldergrove Public School, we are working towards the kind of Canada and world that we want, something that our Board supports us in doing,” said Chanicka.

“For me, being a torchbearer places a spotlight on the great work of our school and our School Board.”

“We couldn’t be more proud.”

Both the Pan Am and Parapan Am Games are held every four years for the athletes of the 41 member nations, in the year preceding the Olympic and Paralympic Summer Games.

The Pan Am Games have been hosted in a dozen countries throughout the Americas and Canada has hosted them twice, in 1967 and 1999.