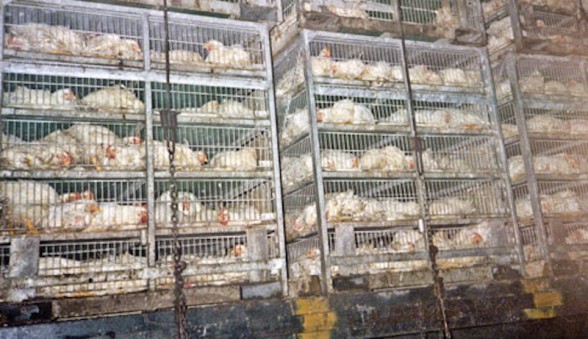 “The day may come, when the rest of the animal creation may acquire those rights which never could have been withholden from them but by the hand of tyranny…The question is not, ‘Can they reason?’ nor, ‘Can they talk?’ but, ‘Can they suffer?'” ~ Jeremy Bentham (1748 – 1832), Introduction to the Principles of Morals and Legislation.

Have you ever considered a chicken? Not as a nugget, kebab or omelet, but as a creature that has needs, feels pain and suffers.

Chicken and eggs have been commodified by our desire for cheap plentiful meat and eggs; indeed, the word “chicken” has become the name of a product rather than that of an animal. More than 50 billion chickens are raised for meat and eggs worldwide annually, with about 10 billion of them in North America. In fact, chickens represent the overwhelming majority of agricultural animals in North America.

Nearly all North American chickens are raised and slaughtered in industrial operations. Despite the slick marketing, they do not live in bucolic bliss, roaming sunny meadows, dust-bathing and roosting in rustic sheds. Most chickens raised for meat, known as broilers, are engineered to grow rapidly in crowded barns with tens of thousands of other birds. The vast majority of hens producing our eggs spend their lives crammed, with several other birds, into small “battery” cages. The factory chicken’s life is far removed from bucolic bliss.

Peeking Inside the Factory Farm

Despite the animal industry’s scale, it’s remarkable that the plight of billions of animals is largely invisible to us. Recently, we got a glimpse into that invisible world through a Mercy for Animals Canada video aired on CTV’s W5 [caution: video is disturbing]. Their investigation shows chickens at Maple Lodge Farms’ slaughterhouse near Toronto arriving frozen to death, handled roughly, shackled inappropriately for slaughter and possibly scalded alive.

The company responded saying, “the humane treatment of the birds in our care is a very high priority, and a moral responsibility, that we take seriously.”

Expressions of concern and moral responsibility ring hollow in light of the company’s convictions in 2013 and 2014 on 20 counts of failing to humanely transport chickens to slaughter (chickens froze to death in sub-zero winter conditions). The judge found that profits trumped animal welfare. Despite the convictions, Maple Lodge continued breaking the law making the Canadian Food Inspection Agency’s “Animal Transportation Repeat Violators” list on numerous occasions in 2014.

The animal industry’s spin doctors follow the same script when caught in the act:

The egg and the pork industries deployed this crisis management model when we got a glimpse into their hidden worlds too.

This talk track suggests that the industry cares about animals and any horrors exposed are simply aberrations by a few “bad apples.” While particularly heinous acts of cruelty occur in industrial farming, it’s fallacious to use those incidents to conclude that, on the whole, the system is sound.

Rather, the problem is the system itself because it creates conditions where animal suffering can easily become commonplace and routine. When billions of animals are systematically raised and killed a reasonable person may assume that widespread suffering is inevitable.

Maple Lodge Farms slaughters about 500,000 chickens daily. One can easily imagine the stress on animals and workers in such an environment, some of which is depicted in the Mercy for Animals video.

“Each employee is expected to hang 20 birds a minute…So employees are hanging birds as fast as they can to keep up. So it’s being grabbed pretty violently. Sometimes you’ll see bones protruding out of the skin, you see toes ripped off. It’s pretty horrific.”
~ from CTV W5

The Business of Chicken

Chicken is a big business. Each year we consume more than 650 million of the birds in Canada. Given those numbers and the significant profits involved, it’s no wonder that relatively small fines don’t reform bad behaviour. Arguably, fines are just a cost of doing business.

Although it may be business as usual behind the scenes, the companies know that consumers care about animal welfare. That’s why many of them humane-wash their products by extolling the virtues of animal welfare, and portraying happy animals on idyllic family farms. In this regard, Animal Justice Canada is challenging Maple Lodge Farms for allegedly using false advertising and claims.

Halal meat is also a growing and lucrative market. That’s likely why companies like Maple Lodge prominently market their halal products in Canada’s Muslim communities. The company reportedly slaughters tens of thousands of chickens a day, at an industry average rate of about 140 chickens a minute, to produce its halal products.

Factory farming raises troubling questions in light of Islamic ethics, which requires significantly more than perfunctory ritualized killing of animals used for food. Islam mandates merciful and compassionate treatment of all animals at all times, from birth to death. Therefore, many common practices in factory farms (where animals are raised) and industrial slaughterhouses (where animals are killed) are inconsistent with those ethical requirements.

Jeremy Bentham would agree with Islamic law and ethics, which says animal interests matter and humans have duty to seriously consider them. A genuine halal standard that is holistic, substantive and true to Islamic ethics would be a positive development for animals and consumers. Unfortunately, we lack credible, transparent and robust halal standards and certification.

A Better World for All

The virtual hell created for tens of billions of animals by factory farming is one of the greatest moral issues of our time. Yet, our desire for cheap, plentiful animal products and the corporate interest in profits above all else have conspired to keep the plight of countless sentient beings in the dark. Regrettably, our politicians and religious leaders remain largely silent, while the legal system stymies efforts by those who try to give animals a voice.

Positive change requires us to take animal interests seriously in the all the choices we make, as consumers, citizens and human beings. Those choices are the crucial first steps towards a just society built on compassion, dignity and respect for all creatures.

This article was originally published in the Huffington Post and it is re-printed here with the permission of the author.

Ziyaad Mia is a Lawyer, Adjunct Professor, Osgoode Hall Law School and Founder, Give30.ca. His articles can be read here