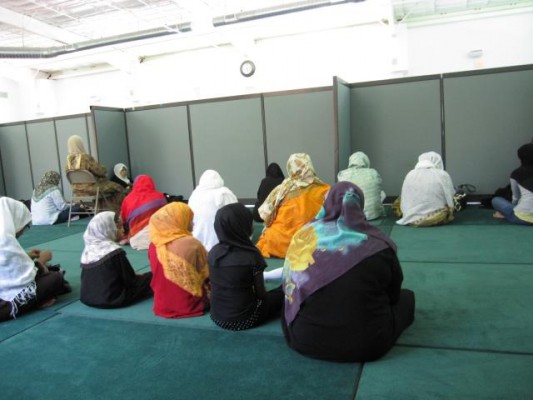 (August 25, 2015) – The Islamic Society of North America (ISNA) will launch a campaign calling for inclusive, women-friendly mosques across North America during a special session to be held at ISNA’s 52nd Annual Convention in Chicago over the Labor Day weekend.

“The campaign’s goal is to realize the Prophetic model and calls upon all masajid [mosques] to ensure women are welcomed as an integral part of the masjid and encouraged to attend,” reads the statement prepared by ISNA’s Task Force for Women-Friendly Masjids.

The statement to be launched on Friday evening, September 4, during the convention was initially prepared by ISNA’s Task Force for Women-Friendly Masjids with the input of the Fiqh Council of North America and many other Islamic scholars.

The lack of inclusion of women in American mosques has led to growing calls for reform of the institution.

“Mosques reported an average of 18% female attendance at Friday prayers,” noted the report.

“The percentage of female attendance has not changed over the past decade.”

Over the years, many Muslims have criticized the prayer space provided for women in mosques.

In response, Chicago blogger Hind Makki launched the blog Side Entrance that allows people from around the world to post photos from mosques around the world, showcasing women’s sacred spaces, in relation to men’s spaces.

“We show the beautiful, the adequate and the pathetic,” reads the title on Hind Makki’s blog.

The ISNA’s Task Force for Women-Friendly Masjids campaign will also call for “Women to have a prayer space in the main musalla (prayer hall) which is behind the lines of men but not behind a full barrier that disconnects women from the main musalla and prevents them from seeing the imam.”

The statement recommends, “women actively participate in the decision-making process of the masjid, best realized by having women on the governing bodies of masajid.”

Running from September 4-7, this year’s event is held under the title “Stories of Resilience: Strengthening the American Muslim Narrative”.