(September 8, 2015) – Addressing challenges facing the American Muslim community, attendees at ISNA’s annual convention held in Chicago this past weekend think it is critical to define themselves and create their own authentic narratives to offer a correct image for their community.

“There has been a decline in favorability of Muslims from 35% to 27% in 2014, according to a 2014 Zogby poll,” Maha Elgenaidi, CEO and chairman at ING (Islamic Networks Group) told the session in her introductory remarks.

“According to a 2014 Pew poll, Muslims rated ‘most negatively’ in sentiments of all religious groups,” she added.

Daniel Tutt of Unity Productions Foundation (UPF), which has a mission of creating peace through the media, noted that Islamophobia affects all Americans.

“Americans are fundamentally good people,” said Tutt. “Only 45% know Muslims personally, so most people know of Muslims through media.”

Speaking of the work of UPF in countering negative stereotyping of Muslims, he said, “We offer programs to humanize Muslims by creating documentary films.”

Ameena Jandali, a founding member of Islamic Networks Group (ING), warned that ISIL is defining the perception of Islam and Muslims among Americans.

“Everyone knows Islam through ISIL,” she said. “This is unprecedented compared to previous decades.”

“There are certain frames that define the narrative,” Jandali added.

“The solution is to present diverse images of Muslims, identify commonalities and shared experiences with Americans, and highlight contributions of Muslims.”

ING (Islamic Networks Group) is a respected American non-profit organization with affiliates throughout the country that counter prejudice and discrimination against American Muslims.

The theme of changing the perception of Islam and Muslims ran throughout Saturday’s session.

According to ISNA, “This year’s convention theme is designed to highlight the different challenges facing American Muslims today and the critical need to shape the Muslim community.” 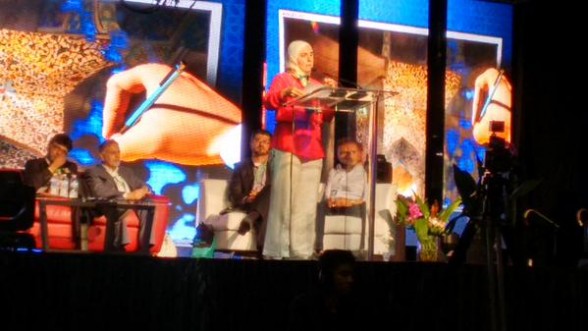 Another session during the ISNA convention looked at how Muslim communities in the West can change stereotyping by engaging in social activism and in movements such as the Labor movement.

Congressman Keith Ellison reminded the participants that Muslims are already part of the Labor movement.

“We are already part of the Labor movement,” he said. “We’ve to get out of our mind that the American Muslim community are all cardiologists.”

Maimuna Syed, who has over 8 years of experience in the labor movement, reminded the session that Labor is a significant group in the country.

“Our membership is increasingly diverse,” she said. “The Labor movement is the largest civil rights organization in the country.” 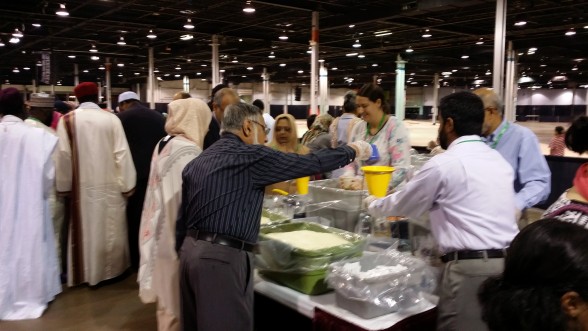 Dozens of Muslims took time out on Sunday from the workshops and plenary sessions at the ISNA 52nd Annual Convention in Chicago to package meals for needy people.

“I wanted to come out this morning to help,” Halid Skenderi, a teenage volunteer told OnIslam.net.

“It is important that we feed the poor and those who have less than us.”

Joining with the American charity Stop Hunger Now volunteers of all ages gathered in the convention prayer hall early Sunday morning to take part in the “Live Your Faith Through Service to Others” service activity.

Stop the Hunger Now, which was founded in 1998, has provided over 180 million meals in 65 countries.

A delegation from Nigeria representing the Sultan of Sokoto and President-General of Jama’atu Nasril Islam are attending the convention and came out to observe the food packaging as well as participate in the activity.

“I am impressed by the progress and development of the American Muslim community – in their scholarship, Da`wah, development of Islamic Centers and social activism.”

“The ISNA convention has been a wonderful experience for us,” he added.

“It has brought Muslims from America and the world together at a time when the Ummah is going through many trials.”

This year, Stop the Hunger Now will package 45 million meals, and ship over $9 million in donated aid, mainly vitamins and medical supplies.

Stop the Hunger Now meal-packaging programs operate at 19 cities in the US and in South Africa, Malaysia, India, Italy and the Philippines.

According to the organization, “in just under two hours, a group of 30 to 40 volunteers can package 10,000 nutrient-rich meals for the undernourished globally.”

Throughout the convention, attendees were also encouraged to register with the bone marrow registry and donate to a blood drive.

An Islamic Film Festival, an Art and Photography Exhibit, a National Qira’at Competition, a Matrimonial Banquet, a women’s Fashion Show, Meet the Author sessions and a Health Fair ran throughout the 4-day event, and large crowds visited the bazaar which featured 500 vendors.

ISNA’s annual convention dates back to 1963, when the first such event was organized by the predecessor to ISNA, the Muslim Students Association of the United States and Canada.