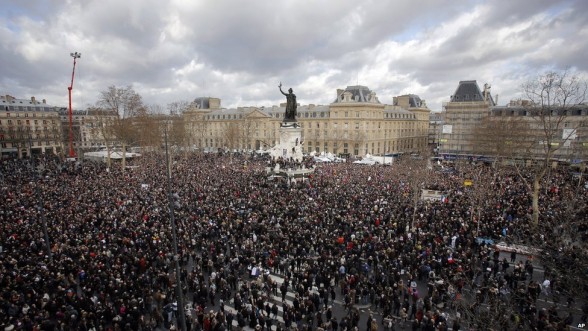 (January 12, 2015) – The massacre at Charlie Hebdo, a French Satirical magazine, by Muslim extremists that led to a nationwide manhunt and ultimately 17 fatalities has once again focused global attention on religiously motivated violence by Muslims. From Peshawar to Paris, Muslims have left a bloody trail that challenges the claim that Islam is a religion of peace in the minds of many all over the world. The marches in Paris and other cities of France brought millions of people into the streets and many world leaders travelled to Paris to express their solidarity.

No matter how much and how many Muslims protest that these heinous acts are not in accord with Islamic teachings, Islam and Muslims are being blamed and will suffer from the blowback. Muslims in the West, who live as weak and marginalized minorities, will now be confronted with more Islamophobic discourses, policies and hate crimes. This in turn will lead to more radicalization, more despicable acts, and then another stronger backlash.

Before the crisis escalates to such drastic levels that it will be impossible to dial back its consequences, Muslims need to start and sustain two serious conversations, which are honest, frank and followed by decisive action.

A Dialogue with the West

The first dialogue must be inter-faith and inter-civilizational. This engagement already exists but needs more depth, more frequency and more intensity.

Even though many commentators, scholars and public intellectuals have written books and columns and discussed in public forums Islamic teachings that condemn terrorism and intolerance, negative views of Islam, Shariah and Muslims not only persist but also are solidifying in Western publics. Regularity of increasingly horrifying massacres by Muslims, who justify them on Islamic grounds and the rising influence of Islamophobic commentators undermines decades of good work by sincere bridge builders.

The best way to combat this rising Islamophobia is to proliferate dialogues with mainstream communities. In some communities, particularly in Europe, Muslims are ghettoized, isolated and unwilling to engage. This makes them dependent on non-Muslim liberal voices. I believe that for all their articulate and good intentioned efforts liberal voices may not be as persuasive as an awkward but honest Muslim voice.

Muslims must first acknowledge that we do have a serious problem of religiously motivated terrorism in our world. We should not try to whitewash it or disguise it or blame others for it. We should then engage with the rest of the civil society, not to teach them about Islam, or to teach them about their own history, but to seek their support and cooperation in combating the twin threats to us all – Islamophobia in the West and Muslim radicalism everywhere. It is only by recruiting Western publics, media and civil society institutions in our campaign against extremism, will we succeed in combating both Muslim radicalism and Islamophobia.

The most important reality that we need to convey to Western society is that blaming Islam is counterproductive. It empowers radicals, legitimizes them and increases their support base. Isolating them as extreme, fringe and un-Islamic is the way to undermine them and their support.

We need a serious global Muslim-Muslim dialogue that discusses what Muslims can do to combat the extremism now rampant in the Muslim World. Even as I engage Muslims globally through social media, I am disturbed by how much support there still is for the Taliban or even the extremists who committed the massacre in Paris. Hiding behind Western hypocrisy and or by just focusing on it, many Muslims are allowing radical movements to thrive and even gain support.

Democracies like Pakistan and Egypt are being destabilized, the Arab Spring – a once in a century opportunity—was squandered, reasonably developed nations like Iraq, Libya and Syria have been reduced to failed states, and newer and newer extremists movements are emerging, ever more viscous and ever more powerful. Millions of Muslims are dead, as a result of war and terror, or displaced. At the turn of the century we had only Al Qaeda to contend with, now we have Boko Haram, Daesh, Taliban and spontaneous lone wolfs everywhere.

Muslims in attempting to Islamize politics have politicized Islam. Selective reading of history, of sources, of scholars is being used to justify viscous politics. Until we disentangle Islam from the dirty politics of our time, we will never be able defend Islam as a religion of peace and present Prophet Muhammad (pbuh) as mercy to all of humanity.

Muslim extremism is grounded in our past and in our heritage we need to have a sustained dialogue to deconstruct it before more chaos and violence further unravels our nation and our societies.