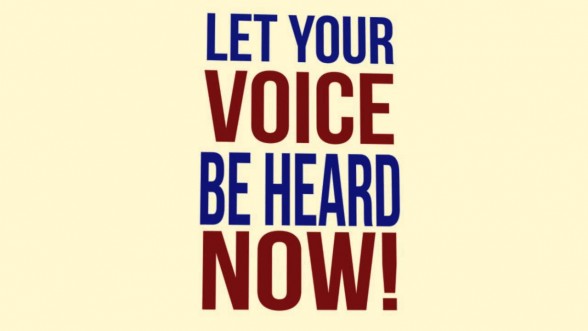 (September 15, 2015) – Social activists, academics, professionals and community members congregated in North Toronto this past weekend to discuss and exchange ideas about civic action within the Muslim community.

The event was organized/hosted by the Organization for Islamic Learning (OIL), a non-profit organization dedicated to promoting learning based on Islamic Revelation, and marked the contributions of the late Ghulam Abbas Sajan, who was an instrumental advocate within the Muslim community.

Steven Zhou, freelance journalist for the Huffington Post, Al Jazeera America and CBC News, moderated the panel discussion that explored the potential of Muslims to positively influence the economic, political and environmental outcomes through civic engagement.

Mohammed Ladha from the Canadian Muslim Vote, opened the discussion highlighting the importance of Muslim participation within the electoral process.

“Muslims in Canada represent just around 3% of the population, and there are approximately 1 million Muslims from coast to coast. In 2011, only 30-40% of those Muslims actually cast a vote in the federal election,” noted Ladha.

The national average for voter turnout in the last federal election was 60% within the general population. Compared with other faith-based communities, electoral participation ranges from 70% in the Hindu community to as high as 85% in the Jewish community; Muslims have to become more engaged in Canadian political and civic society in order to have a measurable impact on policies that our elected official enact.

Sitting on the panel were several prominent members of the community who were involved specifically with civic engagement within the political process and covered issues such poverty, race relations, the environment and security. 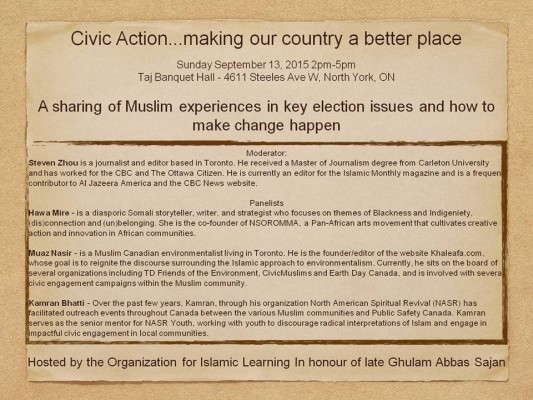 – Hawa Mire is a diasporic Somali storyteller, writer, and strategist who focuses on themes of Blackness and Indigeneity, (dis)connection and (un)belonging. She is the co-founder of NSOROMMA, a Pan-African arts movement that cultivates creative action and innovation in African communities.

– Muaz Nasir is a Muslim Canadian environmentalist living in Toronto. He is the founder/editor of the website Khaleafa.com, whose goal is to reignite the discourse surrounding the Islamic approach to environmentalism. Currently, he sits on the board of several organizations including TD Friends of the Environment, CivicMuslims and Earth Day Canada, and is involved with several civic engagement campaigns within the Muslim community.

– Kamran Bhatti is involved with the North American Spiritual Revival (NASR) and has facilitated outreach events throughout Canada between the various Muslim communities and Public Safety Canada. Kamran serves as the senior mentor for NASR Youth, working with youth to discourage radical interpretations of Islam and engage in impactful civic engagement in local communities.

Throughout the evening, the audience raised important issues such as intra-community relations, the role of the media in shaping the political discourse and the impact of racism in civic participation. Several participants shared stories about their experiences with the judicial and law enforcement systems and how systemic barriers need to be removed before minority communities feel comfortable engaging in the electoral process.

There was a general consensus that Muslims have the capacity to impact on the political process. However, it requires the leadership and active engagement of the community to facilitate this change. Participation is key to change.