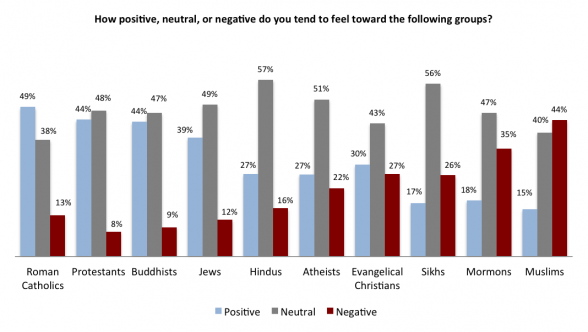 (March 26, 2015) – Canadians continue to have a negative image of the country’s Muslims, according to an Angus Reid Institute poll released today.

When Canadians were asked how they feel – positive, neutral or negative – about each of 10 different religious groups, Muslims had the lowest image score.

44 per cent of Canadians polled had a negative view of Muslims, 40 per cent were neutral and 15 per cent gave a positive response.

“The results paint a fascinating portrait of Canadians’ overall orientation towards various forms of the religious ‘other’,” noted the Angus Reid Institute.

Jews and Hindus also emerge with overall positive ratings but Evangelical Christians and atheists are more polarizing with Canadians roughly as likely to express a negative as a positive feeling about these two groups.

The comprehensive public opinion poll on Canadian views towards religious belief, faith and multi-faith issues from the Angus Reid Institute also reveals a solid core of Canadians continues to embrace the Christian faith and other religious traditions. 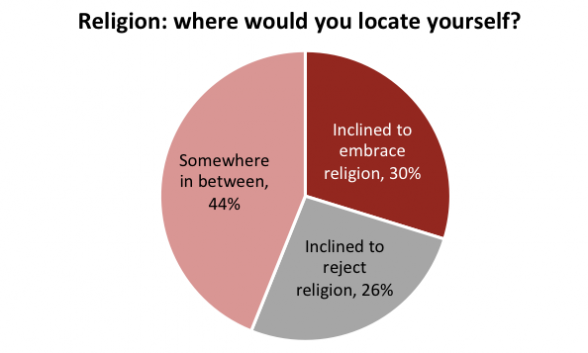 The study shows that atheists and agnostics are now part of a second significant, growing segment of people that reject religion.

A third and sizable segment of the population constitutes something of an “ambivalent middle” who say they neither embrace nor reject religion.

The Angus Reid Institute is a national public opinion research organization established to enhance and encourage better understanding of issues and trends.

The Institute has conducted similar explorations on this subject.

In 2009 and 2013, Canadians were asked if they held overall favourable or unfavourable views of the world’s main religions – as opposed to the current study’s focus on the religions’ adherents.

According to the current study, one of the keys to understanding the current state of organized religion in Canada is to look at immigration patterns.

“Historically, the life-blood of previously dominant United, Anglican, Presbyterian, and Lutheran denominations was immigration from Britain and Europe,” says the study. “But as immigration patterns have shifted, so too has growth in different religions.”

“With greater immigration from Asian countries in particular, the greatest increases have been among Roman Catholics, evangelical Protestants, and other major world faith groups.”

The study is presented in three broad sections, “Religious Pluralism and Polarization”, “Religion a la carte”, and “Topical Findings” and also explored a number of items relating to attitudes, social and personal well-being through the lens of religious identification.