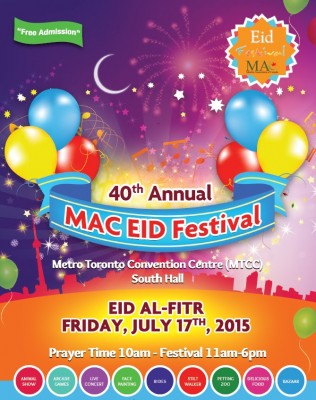 (July 16, 2015) – Canadian Muslims are getting ready to celebrate `Eid al-Fitr on Friday, July 17, with community gatherings and festivals planned in many cities across the country to mark the end of the holy fasting month of Ramadan.

“This is the largest `Eid gathering and carnival in the Greater Toronto Area.”

The event which includes the ‘Eid prayers and the festival is expected to attract over 10,000 people.

“It attracts thousands of families for the ritual morning congregational prayer, followed by a fun-filled day of carnival rides, shows, a large multicultural bazaar, and delicious food,” said Amal Albaz.

Islamic scholar Dr. Jasser Auda, a Member of the European Council for Fatwa and Research and a founding member of International Union of Muslim Scholars, will conduct the prayer services and deliver the ‘Eid sermon.

“The theme of my Khutba will be Reflections on the Prophet Muhammad’s last sermon,” Dr. Jasser Auda told IQRA.ca. 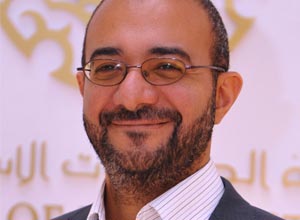 “My message to Canadian Muslims is to realize the centrality of Islamic principles – sanctity of life, dignity, family and property – in the message of Islam.”

“The Prophet, peace be on him, in his last sermon, advised men to be kind to women, and for Muslims to maintain peace amongst each other and with the world,” he added.

`Eid Al-Fitr is one the two main Islamic religious festivals along with `Eid Al-Adha.

After special prayers to mark the day, festivities and merriment start with visits to the homes of friends and relatives.

And while traditionally everyone wears new clothes for `Eid, children look forward to gifts and traditional `ediya (cash).

The Muslim Association of Canada is also aiming to help disadvantaged Muslims celebrate a joyous ‘Eid by sponsoring needy families to attend the festival.

In partnership with several social support organizations, the Association will be inviting these families free of cost.

Similar large gatherings are planned in other major Canadian cities. 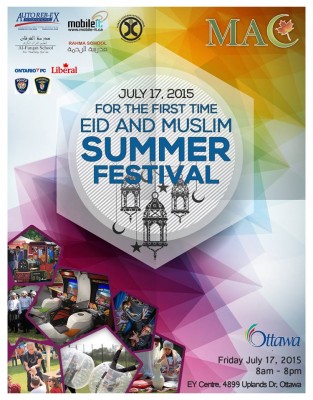 In Ottawa, the national capital of Canada, the Muslim Association of Canada will be holding the ‘Eid al-Fitr celebration in conjunction with its popular Muslim Summer Festival.

“The Muslim Association of Canada (MAC) is excited to announce that on Friday July 17, 2015, we will be celebrating our 2 largest annual events together – The Muslim Summer Festival and ‘Eid Al-Fitr Celebration,” said MAC in a press release.

“Last year’s attendance surpassed 10,000 visitors and we hope to welcome an even bigger audience this year.”

“The Muslim Summer Festival is recognized by the City of Ottawa as a city-wide festival,” added the organizers.

“This family-friendly festival will continue the tradition of celebrating all cultural and religious backgrounds, with our title, ‘The World in One City’, and theme, ‘Contribution to Science’.”