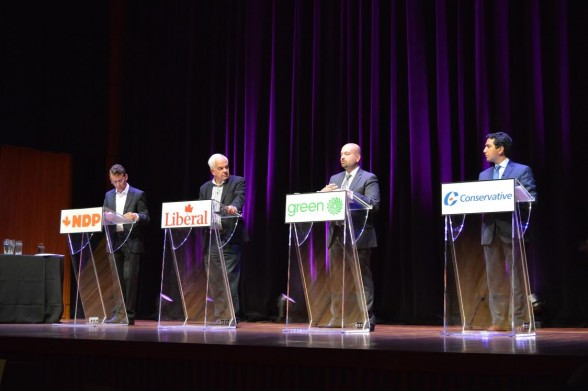 The debate featured candidates from the Greater Toronto Area representing each of the four major parties.

“This is about the voiceless having a voice,” Zaib Shaikh told the capacity crowd in his welcome remarks.

Shaikh, best known for his role as Amaar Rashid, an imam in the CBC Television sitcom Little Mosque on the Prairie, urged the mostly young Muslims to “own up and be part of the conversation.”

The debate was streamed on Rabble.ca and viewing parties were organized in 6 Canadian cities to view the event. The twitter hashtag, #muslimyouthdb8, trended across Canada throughout the evening.

Bills C-24 and C-51 and the Syrian refugee crisis were the most hotly debated issues throughout the evening.

“We have a moral responsibility to help the Syrian refugees,” said Liberal candidate, John McCallum. “It’s the Canadian way to welcome people and it takes political will.”

NDP candidate Andrew Cash added that the response of the Conservatives to the refugee crisis has been an embarrassment.

“We need to bring our country back,” added Nash.

Bill C-24 allows the government to revoke Canadian citizenship from dual citizens who are convicted of terrorism, high treason and several other serious offences.

“There’s no place for this legislation except the garbage can,” said John McCallum.

The Liberals faced strong criticism from the other parties throughout the evening’s debate for supporting Bill C-51.

Bill C-51, the Conservatives’ anti-terror legislation which was passed earlier this year, faced intense criticism for the expanded powers it gives the police and the Canadian Security Intelligence Service.

”There is no old-stock Canadian,” he said. “We are all Canadians.”

Young Muslims are concerned about the same issues as other young Canadians, said Mohammed Hashim, an organizer with Dawanet.

“The number of young Muslim activists that are going out there, knocking on doors, handing out flyers … has been unprecedented,” he told CBC Radio’s Metro Morning, adding this could be the first election with young Muslims really make a difference on election day.

According to DawaNet’s Project Civic Engagement, the organization aims “to promote Canadian Muslim involvement in and engagement with formal politics at the municipal, provincial, and federal levels of government for a more empowered and visible Canadian Muslim presence.”

“We believe in political engagement at all three levels of government and encourage members of the Muslim community to become aware and active around a variety of issues.”