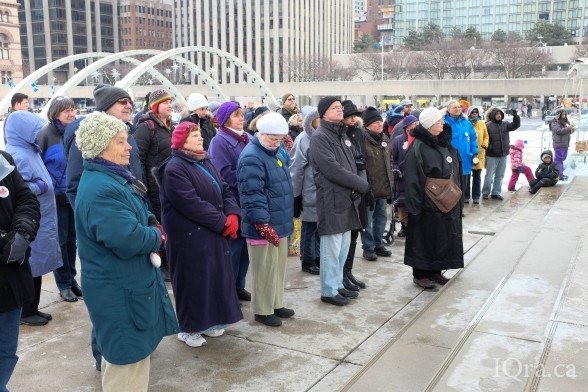 (January 31, 2015) – Canadian Muslims came out today in public squares in four cities to rally for peace and to voice their opposition to terrorism done in the name of their religion.

“This is a grassroots campaign to promote civic engagement and peaceful coexistence in solidarity with all Canadians, and all global citizens.”

Despite the bitter cold temperatures, Muslims, friends from other religious groups and other supporters came out to the peace gatherings titled, ‘United in Peace, United in Compassion’, that were held in the Ontario cities of Toronto, Ottawa, London and Kingston.

“Today, we are gathered here with a very simple message – the message is that Canadian Muslims stand united and in compassion with our fellow citizens,” Shahzad Mustafa, an organizer of the Toronto event, told the crowd gathered at Nathan Phillips Square outside of Toronto City Hall. “This campaign was conceived by Canadian Muslims, concerned parents and young people who know that Islam is being tarred with a brush of extremist violence and fanaticism perpetuated by a misguided fringe.”

“Their understanding of Islam is distorted and plain wrong,” affirmed Mustafa. “We wanted to show Canadians, including our children and young people what Islam really stands for – we want to focus on putting forward a positive message and reclaiming our faith in its true essence.” 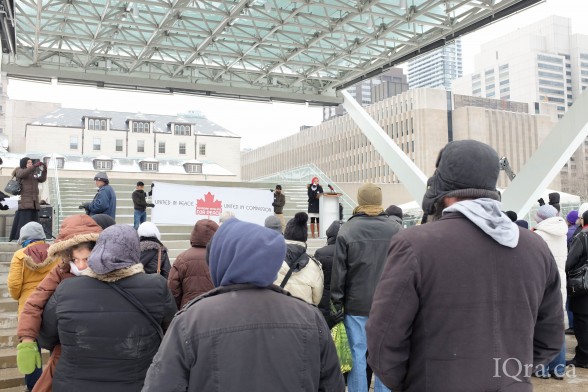 Mustafa told the crowd that the peace initiative has garnered widespread community support and that he has received inquires from other cities wishing to hold similar peace gatherings.

“We are not affiliated or associated with one particular organization,” he said. “However, we have received widespread support from many community members and from our national and local organizations and we are very grateful for that.” 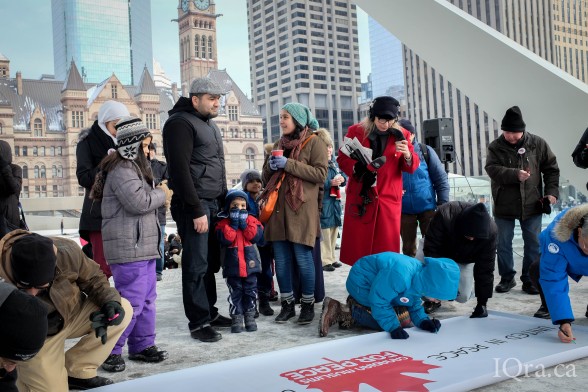 Mustafa went on to issue a call of action to Canadian Muslims to be vocal advocates for the true message of Islam and to become more actively engaged in service activities.

“Our call of action is three-fold – communicate, engage, and serve,” he said. “First, communicate and don’t remain silent, speak about the true teachings of Islam, write letters to the editor and articles, speak to you colleagues, go to your child’s school, be clear in who you are and what you stand for.”

“Second, engage with your fellow citizens and don’t feel isolated, afraid or ashamed; show them through your actions how faith is a positive force in your life and in the lives of those who you touch – be a role model and an example,” Mustafa added. “Third, serve the common good and don’t ignore injustice or the plight of the poor; find out how you can make the lives of those around you better.”

People attending the peace gatherings brought warm pieces of clothing and non-perishable food items that will be donated to local shelters.

“You have taken the valuable time to come here in this bitter cold to join us in a simple but powerful act of compassion,” said Maryam Dadabhoy in thanking the Toronto gathering. “You have brought with you donations for those in need as a beautiful symbol of your commitment to helping make the lives of those around us better. “

“All of you are showing the people of Toronto that Canadian Muslims find inspiration, hope and love in their faith and they want to share it,” she added. “You are showing the violent extremists that their understanding of Islam is perverted and will not be allowed to take root in our community. “

Canada’s Muslim population increased by 82 percent over the past decade to more than 1 million in 2011. Muslims now represent 3.2 percent of Canada’s total population.