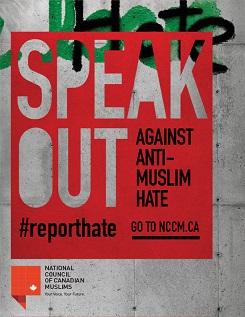 (June 9, 2015) – Anti-Muslim hate crimes have increased by approximately 44% since 2012, according to the latest police-reported hate crime data released by Statistics Canada.

“This latest data is troubling and may show a trend of growing anti-Muslim hate crimes. Our own data for 2014 shows a further increase so this is clearly an issue that deserves more attention,” said Amira Elghawaby, human rights coordinator of the National Council of Canadian Muslims (NCCM).

While there were 17 per cent fewer hate crime incidents reported to police in Canada in 2013 compared with 2012, the numbers reveal that black populations are still the most frequently targeted in hate crimes, and crimes against Muslims rose last year.

Anti-Muslim hate crimes mark the only category that saw a significant increase.

Statistics Canada acknowledges that even this does not show the full picture.

Studies indicate that hate crimes may be the most under reported type of crime including one study that reported that a full two-thirds of victims surveyed chose not to report the crime to police.

Representatives of diverse Canadian communities joined NCCM today to urge elected officials to do more to educate Canadians about the ramifications of hate crimes and to help find ways to address this phenomenon.

The Council also unveiled a national hate crime awareness project that includes a social media campaign as well as an online map to track hate crimes and incidents reported across Canada.

“The federal justice department terms unreported crimes as representing ‘the dark figure’,” said Ihsaan Gardee, NCCM’s executive director. “Canadians may be reluctant to report crimes for a variety of reasons, including further stigmatization.”

“Our aim in launching a national hate crime awareness project is to urge Canadian Muslims, as well as fellow Canadians to report hate wherever and whenever it happens so that we can find ways to combat it,” adds Gardee.

“Our new interactive online map will capture anti-Muslim activity as soon as it is reported to us or reported publicly in a way that is accessible to the general public, researchers, policy makers, elected officials, and the media,” he said. “This will help inform all Canadians about the need to explore and implement proactive initiatives on national, provincial, and local levels.”

At today’s press conference, representatives from various communities spoke about rise of the anti-Muslim hate in Canada.

“The NCCM’s hate crime tracking initiative is a welcome advance in our capacity to monitor bias motivated violence wherever it occurs,” said Professor Barbara Perry from the University of Ontario Institute of Technology, and one of the few Canadian researchers who has studied anti-Muslim hate. “We know all too well that very little such victimization is reported to police for a variety of reasons.”

“Because of this, our knowledge of the patterns and distribution of anti-Muslim and other forms of violent bigotry has been limited – this tool will begin to remedy this short-coming,” she added. “I would like to think it is but one step toward greater attention to the risk to which Muslim communities are exposed.”

“It must, however, only be seen as one instrument in a growing toolkit that will include research, resources and policy intended to ensure that our Muslim brothers and sisters are able to live without fear.”

The Statistics Canada data reveal that the African Canadian community continues to be the primary target of hate crimes, noted Roger Love, Legal Counsel for the African Canadian Legal Clinic, “The fact that we live in a country where persons of African descent continue to be victims of violent crimes for no other reason but the colour of their skin, is deplorable.”

“In order to alleviate some of the barriers faced by the African Canadian community, all officers and Crown Attorney’s should receive special training on how to identify, and investigate hate crimes and incidents of anti-Black hate,” said Love. “As we move into the cyber age resources devoted to investigating incidents of hate speech or racially motivated harassment online have failed to keep pace with reality.”

“As a Canadian Jew who spent much of his adult life fighting hatred, bigotry and discrimination, I am utterly of the view that Canada’s anti-hate laws used as they have been with care and wisdom creates a valuable and needed ‘fence of protection’ for minority groups in this country,” said Bernie Farber, human rights advocate and former CEO of the Canadian Jewish Congress.

“And it was very much thanks to education initiatives such as we are discussing today that led to stopping the hateful bullying of which our community was a target,” added Farber. “Taking a stand against hateful bullying is difficult. Victims would prefer not to make waves in the hope that the hatemonger will simply go away. Community leaders who should be on the frontline of condemnation all too often choose silence. We must not be victims any longer. Silence can no longer be an option.”