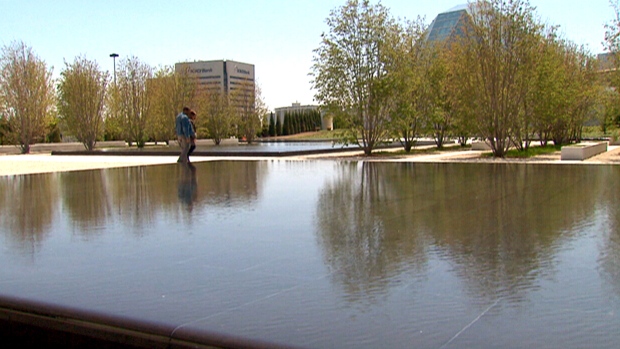 The 6.8-hectare park encompasses the Aga Khan Museum and the Ismaili Centre, both of which were inaugurated last September. All three projects are a major cultural and architectural contribution to Toronto.

In the Aga Khan Park, award-winning Lebanon-based landscape architect Vladimir Djurovic aimed to re-create the sensory experience — sounds, aromas, and colours — that he experienced while visiting traditional Islamic gardens in the Alhambra, Spain and Humayun’s Tomb in India, among other historic sites.

The result, he hopes, is both “ephemeral and eternal,” a space that may change with the passing light or season, yet becomes a permanent legacy for the city of Toronto.

Based on a traditional chahar-bagh (four-part garden), the formal garden within the Park is given a natural geometry through ordered plantings of serviceberry trees.

The reflecting pools mirror the sky and capture architectural details of the Aga Khan Museum and Ismaili Centre.

A private park that is open to the public, the Aga Khan Park hopes to make a significant contribution to Toronto, providing a venue for individuals and families to gather and enjoy a large number of social and cultural activities and programmes.

Community art exhibitions, performing arts events, film screenings, and cultural festivals will be hosted in the Park, beginning with a celebration when the Pan Am lantern comes to the Park on 5 July 2015.

The Aga Khan Park is the ninth park project undertaken around the world by the Aga Khan Trust for Culture. 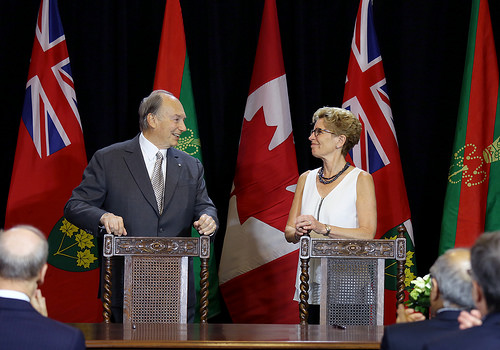 Earlier in the day, Premier Wynne welcomed His Highness the Aga Khan to Queen’s Park for the signing of an Agreement of Cooperation between the province and the Ismaili Imamat.

The agreement outlines areas of cooperation and joint initiatives, including leveraging diversity and culture as an economic driver and supporting a pluralistic approach to education.

In the agreement the government and the Ismaili Imamat have agreed to collaborate on mutually beneficial education initiatives in an effort to foster capacity-building and promote the exchange of knowledge and expertise.

Projects include the secondment of Ontario teachers to the Aga Khan Academies; the creation of opportunities for Aga Khan Academy graduates to attend Ontario’s world-class post-secondary institutions; and the exploration of a range of curriculum-linked resources that emphasize intercultural understanding and that draw on the Aga Khan Museum for its teaching collection and expertise on pluralism of Muslim culture to support learning in Ontario schools.

The agreement also includes the establishment of policy forums to examine leveraging culture as an economic driver and harnessing Toronto’s diverse population to put Canada’s financial capital at the forefront of global economic cities.