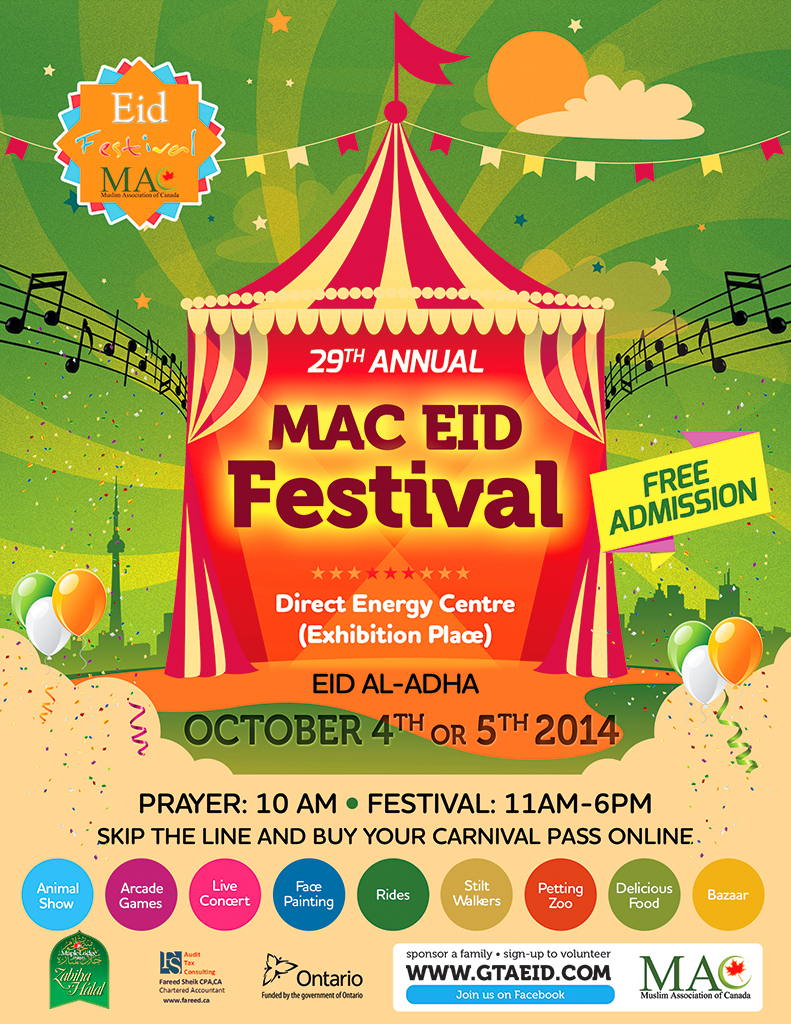 (October 3, 2014) – Thousands of Muslims are expected to attend the largest `Eid Al-Adha prayers and Festival in Toronto on Saturday, October 4, at the Direct Energy Centre, in an impressive display of unity and compassion to the wider community.

“The `Eid Festival will bring together over 15,000 Muslims from across the Greater Toronto Area to pray in unity and listen to the `Eid Sermon by Sheikh Mohammad Zahid.”

`Eid Al-Adha, or “Feast of Sacrifice”, is one of the two most important Islamic celebrations, together with `Eid Al-Fitr.

The Muslim Association of Canada is a national organization that provides religious and educational services throughout the country. The `Eid Festival will be a full day of activities for the entire family, including a children’s carnival.

“With an increasing attendance, this `Eid we have increased the size of the carnival to include additional rides and games,” said Ahmad Attia.

“Our show stage will entertain families and, among other presentations, there will be a very exciting exotic animal interactive show.”

“The bazaar will showcase vendors with diverse products and `Eid souvenirs for the family,” added Attia.

“And while parents wait for their children to go on the rides and enjoy face painting and henna, they can enjoy an international cuisine or a cup of coffee and `Eid desserts.”

Political, civic and Faith leaders will address the gathering.

“This `Eid, the Premier of Ontario, Kathleen Wynne, will be in attendance to offer her respects to the Muslim Community, a major community in Ontario’s social fabric and multiculturalism,” said Ahmad Attia.

Sharing their festivities with those in need, Canada’s Muslims plan a special udhiyah program to serve both Muslims and non-Muslims in Toronto.

“On a local level our `Eid Food Drive and our Udhiya Program will, InshaAllah, serve many Muslim and non-Muslim families in the Greater Toronto Area who are not as fortunate to have food or meat on their tables regularly,” said Attia.

The organizers will be encouraging attendees at the `Eid Festival to make a donation to assist the needy across the world.

“Since the situation has only worsened for Muslims across the world, we will be reminding our Canadian Muslim Community to make a donation to a relief organization,” said Ahmad Attia.

“Our sponsor, Human Concern International, will be onsite to collect for relief assistance for those suffering across the world.”

After the special prayers to mark `Eid Al-Adha, Muslims offer udhiyah, a ritual that reminds them of the great act of sacrifice Prophet Ibrahim and his son Isma`eel were willing to make for the sake of God.

A financially able Muslim sacrifices a sheep, or goat or shares with six others in sacrificing a camel or cow as an act of worship during the four-day `Eid Al-Adha.

The Udhiyah meat is divided in three equal parts, one each for one’s own family, friends and the poor.

It is permissible that someone in another country could perform the sacrifice on one’s behalf.

Muslims make up nearly two percent of Canada’s some 32.8 million people and Islam has become the number one non-Christian faith in the country.

A poll has showed that the overwhelming majority of Muslims are proud to be Canadian and are more integrated and better educated than the general population.