(February 15, 2014) –  Faith leaders expressed deep concern about the growing income inequality that is being experienced by citizens across the City of Toronto during a symposium held at City Hall on Thursday, February 13th, 2014.

“We’re responsible to call the game for what it is – that for the last 30 years, the game has been increasingly rigged – the way we reinforce the need to cut taxes for the wealthy and social programs for the poor,” keynote speaker Armine Yalnizyan, a Senior Economist with the Centre for Policy Alternatives, told the Faith leaders.

“Well, you would think that the greedy were needy and the needy were greedy.”

The Multi-Faith Symposium themed ‘Faith, the City, & the Economics of Justice’ was organized by Faith in the City, an alliance of leaders from various faith traditions who share issues of common social concern.

“Social justice in the 21st century demands your presence in the moment,” added Yalnizyan, one of Canada’s leading progressive voices.

“In answer to the question, what does God want from us – God wants from us that you do justice, that you love kindness and that you walk humbly with your God.”

In her inspiring keynote address, Yalnizyan told the Faith leaders that the unemployment rates among young people despite their good educational backgrounds point to a profound failure of leadership.

“This is more a moral and ethical phenomenon that an economic one – it is the failure of our leaders, including you as faith leaders, to make it clear that this is a bankrupt system,” she said.

“That the morality and value base of it is bankrupt and to question the ascendance of individualism that leads us constantly to blaming the victim for a situation that is largely systemic.

“But you can’t work your way out of poverty when the minimum wage is legislated to be pegged at below the poverty rate.” 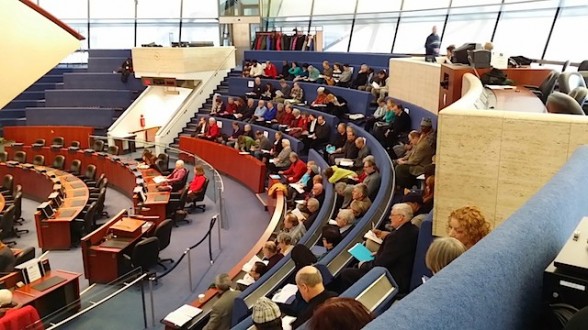 The full-day conference featured interactive workshop sessions and provided Faith leaders and activists the opportunity to network with a wide array of people working on social justice issues in the city.

“Faith communities experience the results of this inequality every week in the families they serve,” Joe Abbey-Colborne, Coordinator of the Symposium, wrote in a pre-conference media release.

“Faith in the City alliance is primarily focused on inter-faith action.”

“As we work together with committed people of various faiths to address social issues and advocate for the health and wholeness of the city, inter-faith dialogue happens as a natural bi-product, but it is not the focus of our efforts.”

The afternoon plenary session brought together two of the city’s Faith leaders, Imam Shabir Ally and Rabbi Ilyse Glickman, to address the question, ‘How Can Faith Communities Advocate for a Just Economy?’

“Looking after the poor and needy does not involve just giving handouts – the Islamic ethics include the emphasis on work and on helping yourself,” said Imam Shabir Ally.

“Muslims need to help people, by not only giving them the rations for the day, we need to equip people to earn their own daily bread,” Imam Ally added.

“We need to teach people not only how to look after themselves but we need to be there to stand up for people in ways which they may not be able to represent themselves.”

Rabbi Ilyse Glickman in the closing speech of the Symposium made a passionate plea to the Faith leaders to become engaged in social justice issues and for mutual respect.

“Not giving is not an option in the Jewish community, not participating in acts of justice is not an option, not becoming engaged in greater society’s needs as if they were you own is not a possibility,” said Rabbi Glickman.

“Give you must, even if it is only a penny.”

“Beyond anything else, I can say today that when it comes to matters concerning human beings the most important teaching in Judaism is this – it does not matter which neighborhood you live in, whom you marry, what you do professionally, or how much money you make, our goal is to treat others with respect, if for no other reason that we are all sisters and brothers, we all come from the same cloth of creation,” she added.

“We are thus destined to care for one another all the days of our lives.”