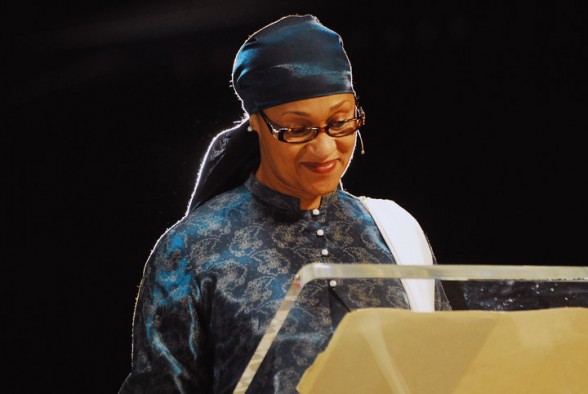 (September 5, 2014) – Tayyibah Taylor, editor-in-chief of Azizah Magazine, the popular women’s journal, and one of America’s most well-known Muslim personalities, has passed away, leaving a big void in Muslim media activism.

“We regret to announce the passing of Tayyibah Taylor, the founder, publisher, and editor-in-chief of Azizah Magazine,” wrote Azizah Magazine publishers in a release late on Thursday night, September 4.

“Please join the Azizah Magazine family in praying for her soul, forgiveness of her sins and shortcomings, and her entrance to paradise.”

Taylor is survived by five children and several grandchildren.

She has been named one of the 500 Most Influential Muslims in the world by the Middle Eastern think tank, The Royal Islamic Strategic Studies.

Through Azizah Magazine, Taylor realized her vision of providing a vehicle for the voice of Muslim American women.

“She leaves behind not just a publication that is a vehicle for Muslim women’s voices or catalyst for empowerment, but a legacy of pure intentions and faith in Allah that have become the core values of the Azizah Family.”

Born on the island of Trinidad in the Caribbean, Taylor grew up in Toronto, Canada and studied biology and philosophy at the University of Toronto.

“She was a pioneer woman who spoke and wrote about Islam and spirituality, often when the only prominent voices in the American Muslim community were of men,” according to the publishers of Azizah Magazine.

“Among the most well-traveled Muslim women of the world, Taylor logged millions of miles in visits to countries on six continents, advocating for peace, constructive interfaith relations, and Muslim women’s empowerment.”

She lived in Jeddah, Saudi Arabia for several years and attended classes at King Abdul-Aziz University for Arabic and Islamic Studies.

Taylor blended her passion for spirituality, women’s issues and communication to further the causes of Muslim women.

She appeared on CNN and other news media to comment on current affairs and she visited 37 countries, spanning six continents.

She presented lectures on Islam and Muslim women at national and international conferences across the world.

“She mentored and prepared Azizah team members to take on leadership roles and trained staff at the task of producing the Magazine.”

“Sister Tayyibah was a sincere and respected community leader whose work and example gave inspiration and empowerment for Muslim women all over North America. I had worked with her very closely on the convention program committee in the past few years. She always brought to the table very scholarly perspectives. She would actively participate in long discussions and always debated matters very respectfully and with a smile. She will be greatly missed by all of us. It is a huge loss to our community.”