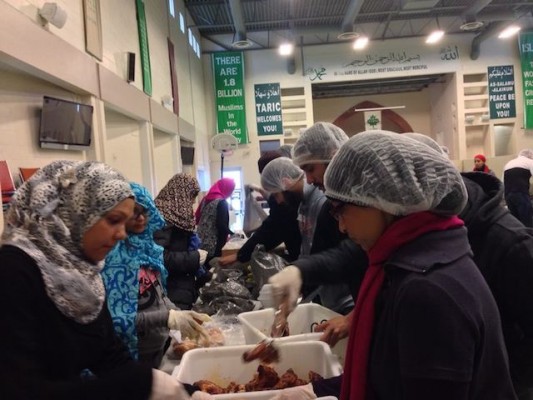 (February 6, 2014) – Volunteers of a Toronto mosque delivered hundreds of meals to shelters in Toronto during Rabi Al-Awwal, the recently concluded Islamic month in which Muslims commemorate the birth anniversary of Prophet Muhammad, peace be on him.

The TARIC Mosque Soup Kitchen volunteers prepared and served 2,320 meals to 10 shelters and programs in the city during the 4 weekends of the month. Entire families, from grandparents to young children, took over the mosque’s gymnasium to prepare and package the meals.

The participants were looking to put into practice the Prophet’s humanitarian message in their city, the Imam of the TARIC Islamic Centre, Shaykh Imran Ally told IQRA earlier.

On January 26, the final day of the project, community and civic leaders were invited to witness the soup kitchen’s operations and address the volunteers.

“I don’t have the words to thank each and every one of you and your families enough,” Imraan Asim, the project coordinator told the volunteers. “Thank you so much for helping in your own respective ways – may Allah shower His blessings on you.”

The Chairman of the Toronto and Region Islamic Centre (TARIC), Haroon Salamat, congratulated the participants who gave freely of their time and resources to make the soup kitchen such a resounding success.

“I congratulate you on the success of four weeks of preparing and delivering food to the needy and homeless,” he added. “It is incumbent on us to feed the hungry, to give water to the thirsty and we are encouraged in the Qur’an and throughout the life of the Prophet Muhammad, peace and blessings of God be with him, to do this as a duty.”

Certificates of appreciation were received by the mosque from the Premier of Ontario, the Hon. Kathleen Wynne and Toronto Councillor, Vincent Cristanti.

The Premier of Ontario, the Hon. Kathleen Wynne commended the Muslim community and the TARIC Islamic Centre for using the occasion to engage in charitable works.

“On behalf of the Government of Ontario, I am delighted to extend warm greetings to everyone for participating in the annual soup kitchen and meal delivery service of the TARIC Islamic Centre,” the Premier wrote in her message. “It is an honor to join members of the mosque who are marking the birth anniversary of the Prophet Muhammad, peace be upon him.”

“Ontario is home to a dynamic Muslim community – you share a rich culture and faith enshrining the ideas of wisdom, devotion and charity, values that you have contributed to the strength and success of our province,” she noted. “This event is an expression of the ideal of charity and of the strong and compassionate society we have built together in this province.”

“I offer my sincere thanks and appreciation to the members of the TARIC Islamic Centre for your participation in this event,” Premier Wynne added. “Know that your efforts have touched the lives of the less fortunate. Please accept my best wishes for a meaningful celebration. May you continue to draw strength from your faith and from each other.”

The North York Women’s Shelter and Ernestine’s Women’s Shelter guests were presented with dinner and pizza party vouchers for their entire shelters, courtesy of the volunteers and donors of the TARIC Soup Kitchen.

Jill Cunningham, Co-Director of Ernestine’s Women’s Shelter, in her remarks, summed up the impact of a charitable activity such as the Soup Kitchen.

“We are in awe at what you helped organize and what you have managed to come together and accomplish,” Jill Cunningham said. “It is just so encouraging to see people coming together and engaging with each other and thinking of others – this is so important and we all need to be doing this.”

“Thank you for being so inspiring and for thinking of us, and I can say with great confidence on behalf of the women and children of the shelter, it means so much to have people you don’t know thinking about you, it is so encouraging.”