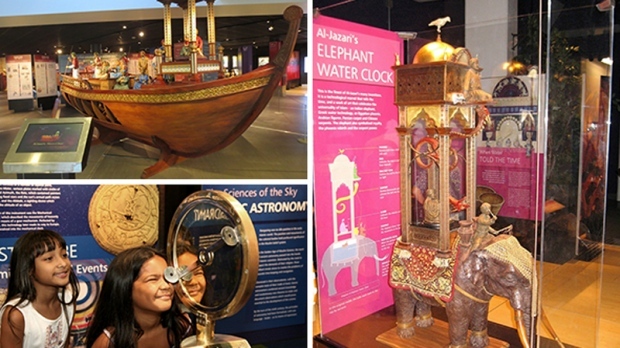 (May 5, 2014) – Step back in time and celebrate important scientific and technological advancements and discoveries made by scholars during the Golden Age of Islamic Science.

The Ontario Science Centre presents an enhanced version of the popular Sultans of Science: 1000 Years of Knowledge Rediscovered¸ which is sure to fascinate visitors, from March 7 to June 7, 2014.

“By presenting Sultans of Science: 1000 Years of Science Rediscovered, an enhanced version of the exhibition we hosted in 2009, we are continuing to ensure our appeal to visitors of all ages and cultures,” said Lesley Lewis, CEO, Ontario Science Centre.  “The knowledge displayed in this exhibition is important to everyone in our diverse society. It provides a glimpse into the history of science in part of the world that our visitors may not be aware was home to great scientific discoveries. The scientists and innovators the exhibition celebrates can be powerful motivators for students, regardless of their cultural background.”

Developed by Cape Town- and Dubai-based MTE Studios, this informative and interactive exhibition, featuring functional large-scale models, interactive maps, puzzles and videos, demonstrates how a great civilization created prosperity across large areas of the known world – from Spain to China.

This exhibition simultaneously highlights important scientific and technological advances made during the Golden Age of Islamic Science and the multicultural roots of modern science and technology.

“Appreciating the efforts and contributions of the past will lead us to a more prosperous future, said Ludo Verheyen, CEO, MTE Studios. “We hope that the exhibition encourages fruitful conversation, emphasizes the importance of preserving and transmitting knowledge and fosters further study of the mysteries of science.”

Al-Jazari’s Musical Boat, a new component in this exhibition, is an excellent example of this preservation and transmission.  This four-metre replica, featuring musicians and crew members that move gracefully, was beautifully constructed by MTE Studios to show early robotics and the ingenious mechanical devices of the time.

“We are so pleased to help bring this exhibition to Toronto,” said Imtiaz Seyid, RBC Royal Bank Vice President, South Asian & Middle Eastern Market. “It’s a unique opportunity to explore and celebrate the diversity that makes our city so great.”