[On March 18th 2014, Newman Centre Catholic Chaplaincy at the University of Toronto and the Intercultural Dialogue Institute at the University of Toronto screened the movie, “St. Francis and the Sultan: A Model for Peacemaking.” Afterwards, there was a panel discussion with Fr. Damian MacPherson, Director of the Office of Ecumenical and Interfaith Affairs, Archdiocese of Toronto and Muneeb Nasir, President of the Olive Tree Foundation; a portion of these reflections were part of Muneeb Nasir’s contribution to the discussion].

A remarkable meeting took place in 1219 between St. Francis of Assisi and Sultan Al-Kamil in Egypt on the banks of the Nile.

In the midst of the Fifth Crusade, St. Francis crossed into the Muslim camp with his companion, Brother Illuminato, in the hopes of converting the ruler of Egypt to Christianity.

St. Francis did not succeed, but he was deeply affected by the encounter, so much so that his later teachings called for Christians to live harmoniously with Muslims.

This meeting is retold in the excellent documentary from Franciscan Media, “In the Footprints of Francis and the Sultan: a Model for Peacemaking,” produced by Franciscan Sr. Kathleen A. Warren and Jayasri (Joyce) Hart.

As I looked at the film, I tried to imagine myself in the tent of Sultan Al-Kamil as St. Francis and Brother Illuminato were brought before him.

Standing before the Sultan are two barefoot monks dressed in patched brown tunics.

I ask why would Sultan Al-Kamil entertain two strange looking characters coming from the enemy camp.

But, St Francis, through his deportment and strong spiritual presence, spoke something beyond words to Sultan Al-Kamil.

He presented a counter-cultural example of poverty, austerity and compassion. He exuded selflessness and an altruistic presence.

The Sultan must have been reminded of the selflessness of the early Muslims who God describes in the Qur’anic verse, ‘they give of themselves even though poverty was their lot.’

Al-Kamil was able to relate to the selflessness that Francis was portraying by his physical presence.

Al-Kamil, who was a cultured and religious ruler, was not detracted by Francis’s disheveled appearance and tattered clothing as he believed the Prophetic teachings that God does not look at our outward appearance but He looks at our hearts.

Al-Kamil believed the Islamic religious teaching that ‘wealth does not lie in the riches you possess but true wealth is the wealth of the soul.’

Francis’s Christian practice of living the Gospel, in many ways, parallels aspects of Islamic religious practices which emphasizes giving, fasting and repentance.

As such, Francis and Al-Kamil found common ground through their religious truths and practices.

It is reported that when Francis was asked why he came, he responded, ‘We are ambassadors of the Lord, Jesus Christ.’

Sultan Al-Kamil saw the distinction that St. Francis drew – he was coming as God’s ambassador and not the Pope’s.

In this way we find common ground despite our differences.

Both men were stepping outside of themselves in this meeting and willing to engage the other, with humility, and move beyond their preconceived ideas of each other – essential elements in peacemaking. 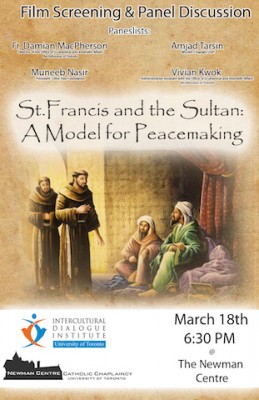 While both Muslims and Christians roundly criticized the meeting, as a failure, it is divine providence that this meeting would lead to a paradigm for peacemaking, interfaith relations and for mutual understanding between Muslims and Catholics.

There is a lesson in this for us, as people of faith – when we do God’s work, when we meet each other for peacemaking, the benefits transcend time and open doors that we cannot imagine.

I found it intriguing that Sultan Al-Kamil allowed St Francis and Brother Illuminato to remain in the Muslim camp for some days and, by some accounts, he allowed them to engage in conversation with Muslims.

Why did the Sultan allow Francis to speak to the Muslims?

First, I think he did this to build a consensus for peace by showing his military leaders a more human side of the enemy.

On the other side, St. Francis was exposed to Muslims and came away deeply impressed by Islamic spiritual life and religious practices.

By meeting the Muslims, he was able to experience the adhan (call to prayer) and the Salat (daily ritual prayers).

Francis’s later writings show that he was deeply impressed by the Muslims’ prayers, so much so that he initiated a version of the call to prayer in his order.

He wanted to bring that same intensity of devotion to the Christian world by creating parallel prayer routines of praise and thanksgiving.

In a letter St. Francis wrote to his followers, ‘At the sound of His name you should fall to the ground and adore him with fear and reverence.’

Both Francis and Al-Kamil practiced the dialogue of religious experience.

We must be able to experience each other’s religious practices as this is an important aspect in dialogue and for peacemaking.

A pivotal moment in St. Francis’s life was his embrace of the leper as an act of penance.

When St. Francis kissed the leper, he risked his own well being to embrace someone who was despised – this transformative moment led him to risk his life and to embrace Sultan Al-Kamil who the Christians despised.

When we open ourselves to embrace the vulnerable in our societies, we are more capable of embracing the other, those whose worldview is different to ours.

The last decade has seen a decline in trust, wars and conflicts, and growing violence – unfortunately, some of this is related to people acting in the name of religion.

We, as people of faith are being called to look beyond theology and religious doctrine and see each other as children of Adam.

Both Sultan Al-Kamil and St. Francis, at that difficult moment in history, treated each other with respect and kindness.

Sultan Al-Kamil’s and St. Francis’s example is that the road to peace is for all of us.

St. Francis bravely sought a personal relationship with the Sultan.

Sultan Al-Kamil’s response is also giving a lesson in tolerance and dialogue.

Al-Kamil, the monarch of Egypt, was open to a dialogue with a couple of unknown Christian monks who were not military or church leaders.

The Sultan was also reflecting the Islamic view that people of religion and people who are pious must be appreciated and respected.

Their legacy to us is that peace gets a chance when the enemy is humanized and the distance is bridged through personal relationships.

The story of the Sultan and Francis gives us hope that peacemaking is possible with dialogue, openness, respect and through personal relationships and selfless giving of ourselves.

The Saint and the Sultan: The Crusades, Islam, and Francis of Assisi’s Mission of Peace Hardcover by Paul Moses