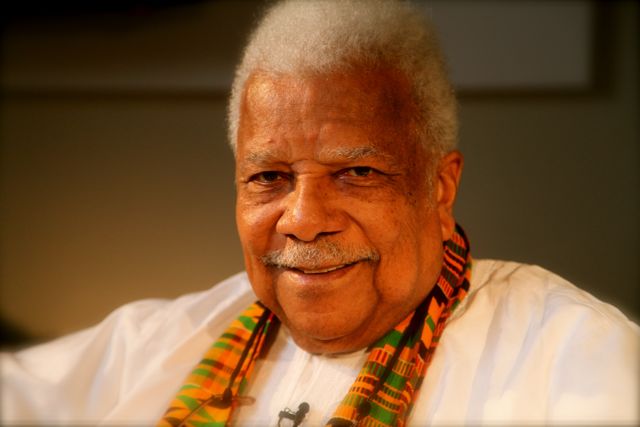 (October 14, 2014) – One of Africa’s foremost intellectuals, Professor Ali Mazrui, died peacefully on October 12, 2014 of natural causes at age 81 at his home in Vestal, New York, surrounded by family.

Prof. Mazrui was an Albert Schweitzer Professor in the Humanities and the Director of the Institute of Global Cultural Studies at Binghamton University in Binghamton, New York.

Kenya’s President Uhuru Kenyatta said Africa had been robbed of one of its greatest scholars.

Prof. Mazrui is well known for his writings on politics in Africa as well as Islamic studies.

He was born on February 24, 1933, in Mombasa, Kenya, to Swafia Suleiman Mazrui and Sheikh Al-Amin Mazrui, an eminent Muslim scholar and the Chief Qadi (Islamic judge) of Kenya.

Immersed in Swahili culture, Islamic law, and Western education, he grew up speaking or reading Swahili, Arabic and English.

He studied at schools in Mombasa, in Kenya. Mazrui obtained his B.A. with Distinction from Manchester University in Great Britain in 1960, his M.A. from Columbia University in New York in 1961, and his doctorate (DPhil) from Oxford University in 1966.

Prof. Mazrui’s prolific writings over the past half-century have shaped ideas about Africa and Islam among scholars and the general public, earning him both international acclaim and controversy.

He authored over forty books and hundreds of scholarly articles and book chapters.

His political analyses appeared frequently in news media around the world.

Prof. Mazrui is best known for the nine-part television series he wrote and narrated, The Africans: A Triple Heritage. A joint production of BBC and PBS, the series originally aired in numerous countries in 1986.

The series, and the book on which it is based, reveals and analyzes the complex ways in which African communities exhibit a blend of three cultures: indigenous, Muslim and Western.