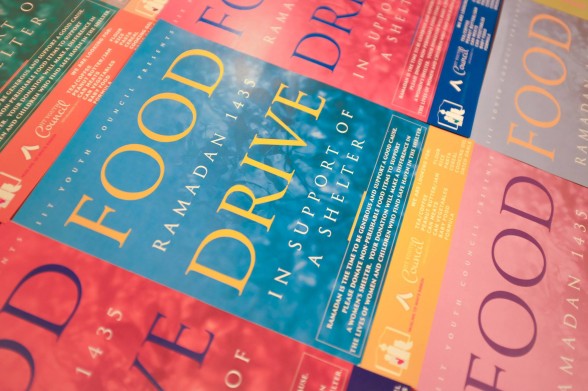 (July 7, 2014) – The Islamic Institute of Toronto’s (IIT) Youth Council and the Muslims for White Ribbon Campaign have launched a Ramadan food drive in support of a women’s shelter.

“Ramadan is a time to be generous and support a good cause,” said Surayya Khan of the IIT Youth Council. “We choose to support a women’s shelter this Ramadan as they provide vital support and shelter to women and children escaping violence.”

The community is being asked to donate non-perishable food items that can be dropped off at the Islamic Institute of Toronto during the month of Ramadan.

The Ramadan Food drive is being co-sponsored by the Muslims for White Ribbon Campaign (MWRC) which was launched three years ago by a group of Muslim men who pledged to join other Canadians in working to end violence against women.

The Campaign aims to break the silence on violence against women in the Muslim community by encouraging Mosques and organizations to sponsor awareness events and deliver a Friday Khutba on this issue.

“The Ramadan Food Drive will assist a women’s shelter but also raise awareness of the issue of violence against women,” added Umar Nasir.

The host charity of the Ramadan Food Drive, the Islamic Institute of Toronto, is a federally registered educational institution. Its mission is to nurture and establish Islam as a living reality in the lives of Muslims and to enhance the Islamic identity in society at large.

“Today, we delivered a van-full of food to a Women’s shelter in Toronto,” Umar Nasir told IQRA.ca. “May Allāh reward, with goodness, all those who have donated to our food drive, so far.”

“We will continue to collect food items throughout the month for the shelter,” he added.