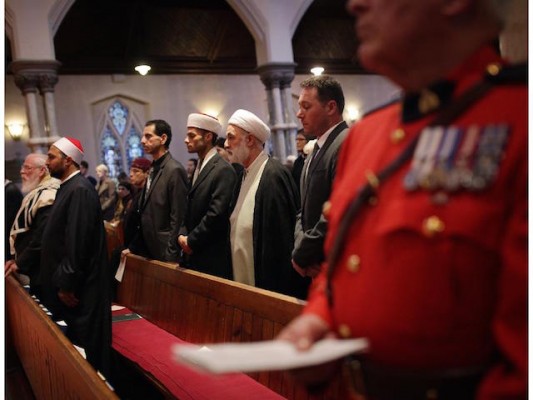 (October 26, 2014) – An interfaith service, ‘A Prayer for Ottawa’, was held on Sunday at Ottawa’s Christ Church Anglican Cathedral bringing together Faith leaders and communities in the wake of the deadly shooting that rocked Canadians on Oct. 22.

“The service is “for the people of Ottawa” and is meant to “create an atmosphere of unity, prayerful resolve and hope as we collectively come to terms with the affront and tragedy of October 22,” said the dean of the cathedral, Shane Parker.

Religious leaders and government officials spoke at the service.

The cathedral’s Choir of Men and Boys, under the direction of Matthew Larkin, a world-renowned musician accompanied the service.

Imam Samy Metwally and Rabbi Barry Schlesinger both condemned the attacks and Ottawa Mayor Jim Watson said that Cpl. Nathan Cirillo who was killed at the National War Memorial “would never be forgotten” in Ottawa.