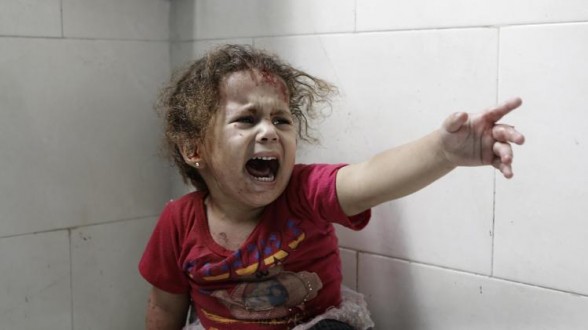 (August 6, 2014) – Ontario says that it do what it can to help children seriously wounded in the Israeli-Palestinian conflict.

“It is with deep sadness that I’ve watched recent news reports of children impacted by the conflict in the Middle East,” said Eric Hoskins, Ontario’s Minister of Health and Long-Term Care in a statement issued today. “My heart goes out to all those who are suffering on both sides of the conflict. I continue to hope for a peaceful solution.”

“As someone who has treated patients in conflict zones, I have a deep understanding of the devastating impact war can have on children,” said Minister Hoskins, a medical doctor who helped found the humanitarian relief organization, War Child Canada, before entering politics. “As Ontarians, we are fortunate to have world-class facilities that can provide high quality care to children in need.”

The minister says the province will work with its hospitals and the federal government to provide help.

“I believe that we have a moral responsibility to, when asked, step up to provide what assistance we can,” he added.

The impetus to bring injured children to Canada began last week when Dr. Izzeldin Abuelaish, a doctor and author who lost three daughters in the 2009 Gaza conflict, pleaded in a newspaper article with the Canadians to bring the wounded here for treatment.

“I am writing today to appeal to you, to all Canadians, to invite 100 children from Gaza, the place where I saw three daughters and a niece die because of violence, to be treated here in Ontario,” wrote Dr. Abuelaish. “Let’s take these young Gazans, innocent as my own children, out of harm’s way.”

Dr. Abuelaish, currently an assistant professor at the University of Toronto, is a Palestinian doctor who was born and raised in the Jabalia refugee camp in the Gaza Strip. In 2010, he published an autobiography, “I Shall Not Hate: A Gaza Doctor’s Journey.”

“There are many severely wounded children in Gaza and the hospitals and health-care personnel there are woefully ill-equipped to treat them all,” said Dr. Abuelaish. “I would like to see our world-class Toronto hospitals offer to take in 100 of the most seriously wounded. “

“This would be a purely humanitarian effort, a way to demonstrate the Canadian values of peacemaking, diversity, tolerance and outreach to those in need, and to set an example to other cities, provinces and countries,” he noted.

Since the appeal by Dr. Abuelaish was published there has been a groundswell of support by Canadians.

“We received a formal request from Dr. Izzeldin Abuelaish to make the necessary resources available to allow our hospitals to support kids who need medical attention due the conflict,” said Ontario’s Health Minister, Eric Hoskins.  “We have engaged with our partners in the health system and are pleased to do what we can to help meet the needs of any child, whether Palestinian or Israeli.”

An online petition urging the provincial and federal governments and hospitals to help Dr. Abuelaish in his efforts has collected thousands of supporters including federal Liberal Leader Justin Trudeau and NDP Leader Tom Mulcair and the Ontario Federation of Labour.

A number of Ontario hospitals, including Toronto’s world-class Hospital for Sick Children, have also offered to treat severely wounded children.

“Consistent with our vision of healthier children, a better world, SickKids has a long and proud history of providing highly specialized care to eligible children from around the globe,” said Dr. Michael Apkon, President and Chief Executive Officer of the Hospital for Sick Children. “We believe every child deserves access to high quality healthcare, including those who are injured as a result of conflict.”

Meanwhile, a spokesman for Canada’s Foreign Affairs Minister, John Baird, said the government was consulting with its partners to see how best to provide assistance to victims of the conflict.