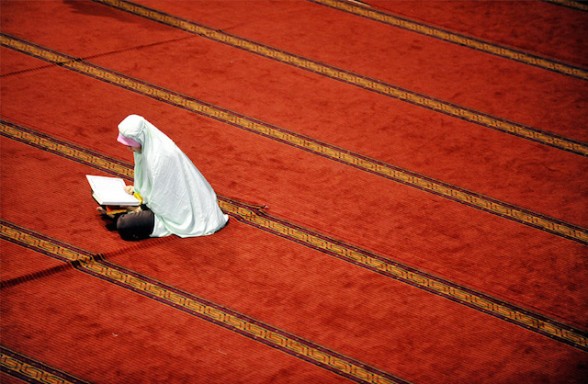 (April 2, 2014) – Zeinab has lived in Syria all of her life. About a year and a half ago, along with her daughter, son-in-law and two grand-daughters, she was forced to flee out of the country due to the violence taking place there.
While she fled she fell down and broke her shoulder, the pain of which still bothers her to this day.
Zeinab now resides in a southern Turkish village and is safe for now from the fighting, and there is a small semblance of normality.
Her husband Nasr, a man of great learning and intellect, passed away three years ago.
But despite her afflictions, she has not forgotten a promise she made to God 23 year ago.
Back in 1991, Zeinab made a decision that she was going to recite the Quran 1000 times from cover to cover before she passed away, for she was taught from childhood of the many rewards of reciting even one letter from this sacred book.
Twenty three years have passed, and although she has lost count, Zeinab is certain that she has read the Quran in its entirety several hundred times.
Currently she is reading the entire Quran twice every 10 days, so at that rate she is completing the Quran at least 6 times per month.
In addition, after every fajr salat (morning prayer) she makes salawat — an invocation of peace and blessings — on the Prophet Muhammad (pbuh) 1000 times before she begins the rest of her day.
Each time she reads the Quran she gains new insight and much needed comfort in the midst of intense suffering that she, and her people, are forced to encounter on a daily basis. She does not have much else to provide her comfort as the bad news of what is taking place in her native Syria keeps pouring in.
Zeinab is well aware that the days ahead of her are much less than the days behind her. Her health is not the best, which acts as a tangible reminder that soon she will go back to her Lord.
Day after day, her eyes fall upon the holy book and its sacred words pour forth from her heart and mouth and rises up to heaven from whence they came; back to the throne of the Almighty who knows and sees all things.
Day after day, she harbours the hope that she will return to her native homeland so that she can be buried with her beloved husband.
And day after day she sends salawat on the Prophet Muhammad — peace be upon him — because no matter how bleak things may be, she has made a promise to God and she intends to keep it.
Zeinab will soon turn 80.
*****
S N Smith writes from Ottawa, Ontario