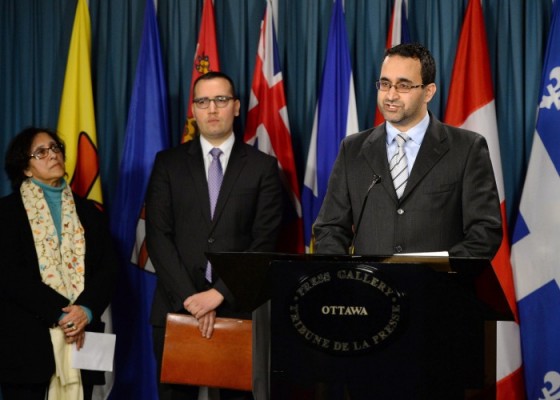 (May 26, 2014) – The National Council of Canadian Muslims is filing a statement of claim in Ontario Superior Court after failing to get an apology from the Prime Minister’s Office for a comment the organization says linked it to a terrorist group.

The comment in question was made by Prime Minister Harper’s spokesperson, Jason MacDonald, in January following NCCM’s objection to controversial Rabbi, Daniel Korobkin, being included in the PM’s delegation to the Middle East.

At the time, MacDonald said, “We will not take seriously criticism from an organization with documented ties to a terrorist organization such as Hamas.”

“On January 28th, the NCCM held a news conference on Parliament Hill announcing that it had initiated a libel notice against the Prime Minister’s Office (PMO) for defamation. Unfortunately, the statement remains on the public record and no retraction was made,” says NCCM Executive Director Ihsaan Gardee.

“This false accusation against the NCCM is of the most serious kind imaginable and was made in an attempt to discredit the NCCM and undermine its ability to conduct its public work.  In order to uphold its good name, the NCCM has no choice but to issue a Statement of Claim for defamation against Mr. MacDonald and the Prime Minister,” says Gardee.

NCCM’s lawyer, Jeff Saikaley, says his client is seeking a public retraction and damages of up to $100,000.

“We did have conversations with the lawyer representing Stephen Harper and Jason MacDonald, and we weren’t able to reach a satisfactory agreement. So we have no choice but to proceed to the next step,” Saikaley said.

“We’re still hopeful that something can be done to avoid an actual trial, but for the time being this is what’s been required to protect our client’s interests.”

“As a long-standing Canadian organization, the NCCM has an exemplary public record including participating in major commissions of public inquiry, intervening in landmark cases at the Supreme Court of Canada, and working with security agencies to promote public safety. We are confident the NCCM will obtain a judgment that upholds its good name and reputation,” adds Ihsaan Gardee.