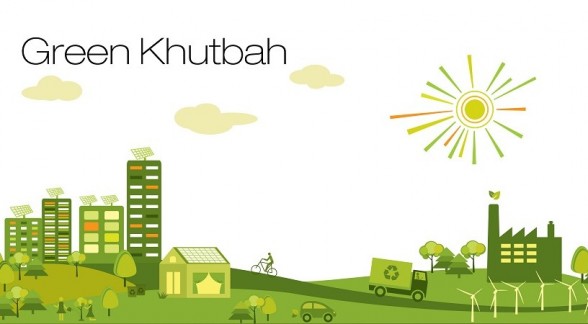 (March 24, 2014) – Muslims across the world will commemorate Earth Day on Friday, April 18th, 2014, with the ‘Green Khutbah Campaign’ as religious leaders deliver a sermon to raise awareness on the environmental challenges facing humanity.

“We are encouraging mosques, schools, universities and Islamic Institutions to devote their Friday Khutbah to celebrate the blessings, graces and beauty of all of God’s creation and to raise awareness on the environmental challenges facing humanity,” said Muaz Nasir, the publisher of the Canadian environmental website, Khaleafa.com and one of the founders of the Campaign.

“This year’s ‘Green Khutbah Campaign’ challenge is to request all Muslims to commit to a sustainable lifestyle with a 3 E action plan – be empowered to act as stewards of the environment, become educated about eco-friendly principles, be engaged by working together to improve the environment,” Nasir added.

Environmental concern around the world is on the wane, according to the GlobeScan global poll that tracked public concern on six environmental issues.

The poll found that across eighteen countries, public concern about water pollution, fresh water shortages, natural resource depletion, air pollution, climate change and biodiversity loss is way down from its peak in 2009.

However, Muaz Nasir says that Muslims cannot tune out from the environmental damage.

“Those who violate or abuse the Trust are described in the Qur’an as those who corrupt, degrade and bring ruin on earth,” Muaz Nasir added. “The corrupters abuse the Trust and are in clear contrast to what Muslims must be – the stewards of the earth.”

An extensive online resource has been created by Khaleafa.com (www.Khaleafa.com/greenkhutbah) to support the ‘Green Khutbah Campaign’ and Islamic organizations and well-known leaders are throwing their support behind the initiative.