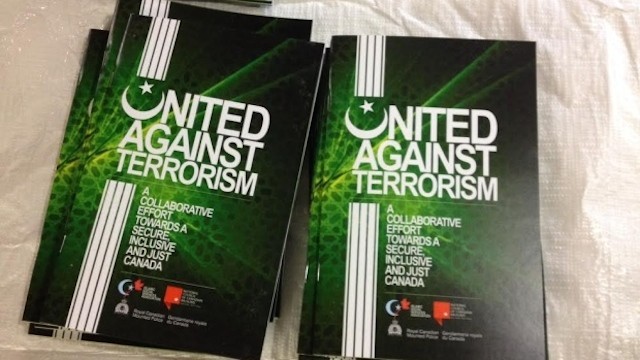 (September 29, 2014) – The Islamic Social Services Association (ISSA) and the National Council of Canadian Muslims (NCCM) today announced the public launch of a 38-page handbook for Canadian Muslim communities about radicalization towards violent extremism.

The handbook, titled United Against Terrorism: A Collaborative Effort Towards a Secure, Inclusive, and Just Canada, answers questions about radicalization and provides Canadian Muslims with tools to confront misinformation and challenge discrimination. Many of the questions and answers emerged from conversation cafés held in Winnipeg at a symposium entitled “United Against Terrorism”.

“We heard and responded to a pressing need to understand and evaluate the nature, origin, causes, facilitators and impacts of violent extremist messages on Canadian Muslim youth,” explains ISSA President Shahina Siddiqui.

“Between the messages of extremists who twist religious principles to rationalize their hateful messages of violence, and the Islamophobes who apply the same cut-and-paste approach to foment hatred of Muslims, there exists a majority of Canadians of all faiths and backgrounds whose voices of reason, compassion, mutual respect, and tolerance are drowned out,” says Siddiqui.

“The best defense to violent extremist messages is to equip communities with sound knowledge, and to ensure that they are well-informed of their civic rights and responsibilities,” says NCCM Executive Director Ihsaan Gardee.

“This handbook offers Canadian Muslims detailed information about how to actively participate in all aspects of civic life and to respond to misinformation.  It also offers concrete steps for families and communities in responding to fears or concerns that a loved one has been swayed by extremist ideology, and strategies for dealing with unfair labels, stereotyping, and stigmatization,” says Gardee.

The handbook is divided into five sections:
1. General information about radicalization towards criminal violence;

2. Responsible citizenship: the Quranic and Prophetic response to extremist messages;

3. Understanding radicalization and the role of the RCMP in law enforcement and national security;

4. Active citizenship: understanding your rights and making a positive impact; and

The handbook will be distributed to Muslim communities and groups across Canada.