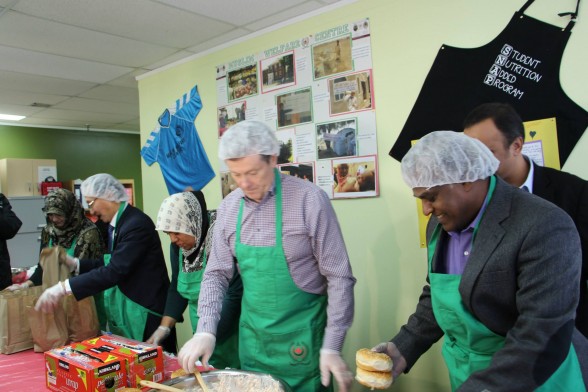 (December 21, 2014) – Toronto’s Mayor, John Tory, thanked the Muslim community for helping out the city’s needy during a visit to the Muslim Welfare Centre in Scarborough on Saturday.

“It shows how one part of the community will pull for another and how the Muslim community is pulling for and helping out other people who are in need regardless of their religious or cultural background,” said Mayor Tory.

“Helping other people with lunches on Saturdays, lunches on Sundays and other works throughout the year, it is a wonderful organization,” said Mayor Tory.

More that 8,400 families rely on the Muslim Welfare Centre’s food bank service each and every year.

Muslim Welfare Centre is a non-profit organization with 3 locations in Ontario and 1 in Quebec.

The Centre’s purpose is to help the less fortunate in the community irrespective of their religion, nationality, caste or creed. Their motto is ‘Service to Humanity is Service to Allah.’

“We have multiple current and on going local programs and projects that the less fortunate of the community can benefit from, as well as multiple international projects to support those in the developing countries,” stated the organization.