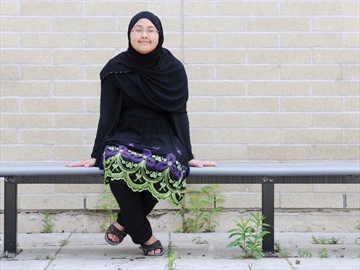 (June 6, 2014) – Mariam Bacchus has won 1st place in the Intermediate Writing category of the 2014 Write and Make Art! Challenge.

Passages Canada announced the winners of the competition in which over 400 students participated, with their poetry, essays and artwork exploring cultural identity, racism and immigration.

Mariam Bacchus is a Grade 9 student at Pickering High School in Pickering, Ontario.

Many of the young artists and writers drew upon personal experiences to inspire their work. Some shared their own immigration stories, or those of their parents, while others spoke up about religious and cultural identity.

In her winning essay titled ‘Unveiled’, Mariam writes, “I’m almost fifteen years old; eight years an immigrant, two years a citizen of Canada. I was born in a small country, one colonized by both the British and the Dutch. Unlike the rest of the continent, Guyana was never under the rule of the Spanish or the Portuguese. Maybe if that were the case, things would have been different. As it is, I don’t have much of a cultural identity.”  Read the full piece…

The jury, made up of editors from The Canadian Encyclopedia, speakers from Passages Canada and staff from Citizenship and Immigration Canada, were extremely impressed by the overall quality of the entries.

Jury member Aruna Papp, a Passages Canada speaker, writer and activist, admitted that scoring the entries was very difficult, but for good reason.

She explains, “I could see the effort and the thought the [students] had put into it.  So for me they are all winners.”