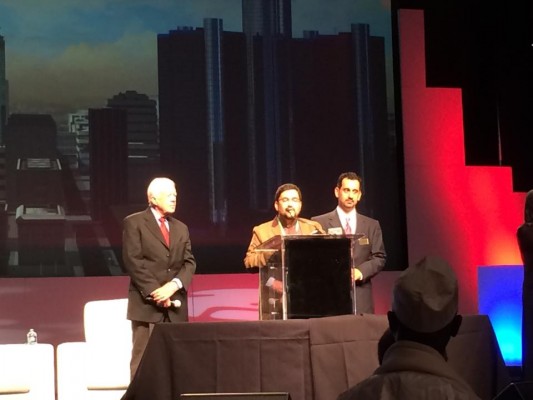 (September 1, 2014) – Former US President Jimmy Carter was warmly welcomed by convention delegates on Saturday at the Islamic Society of North America’s annual convention in Detroit.

“I am delighted to be here with my fellow Americans,” Carter told the full house at the Cobo Convention Center. “I have been looking forward to this opportunity for a long time.”

The former president delivered the keynote address at the convention on the historic need for religious communities to mobilize against discrimination and violence that is directed toward girls and women throughout the world.

“Every year the Carter Center has sponsored a conference on human rights,” he said. “It addresses the horrendous abuse of women and girls around the world. We want to turn this around.”

The 89-year former American president spoke at length about preventing violence against women and girls.

“My hope is all Christians, all Muslims, all people of other faiths, even those who don’t have one, will join in this crusade to end the plight of our wives, our sisters, our daughters.”

A representative group of prominent Muslim leaders at the convention signed a Declaration for Peaceful Communities to join President Carter’s movement for greater human rights.

“Men and women are created equally from one soul,” Carter said quoting from the Qur’an.

“If you were taught by your parents or you believe you’re superior to your wife just because you’re a man, Allah says your wrong,” he advised the audience. “All males … treat your wife as you would like to be treated,”

“At the Carter Center we are deeply committed to peace,” said the ex-President. “We believe that peace can come to the Middle East.”

“Choose peaceful means to resolve conflicts,” he added. “There will be no peace in Middle East without justice and human rights for Palestinians.”

“When my prayers are answered and we have peace in that Holy Land then the Israelis and all their neighbors will be blessed to live in peace and prosperity.”

Earlier on Saturday at the ISNA Community Service Luncheon, President Carter outlined the work of the Carter Foundation and told Americans Muslims to bring peace and justice to all those around them.

“We are all Americans in a system that allows basic human rights – peace, justice and the ability to treat each other as equals,” he told the audience. “I hope all of you will use the principles of Allah to bring peace and justice to all.”

The Annual ISNA Convention was held at Detroit’s Cobo Center from Friday, August 29 to Monday, Sept. 1. The theme of the convention was “GENERATIONS RISE: Elevating Muslim American Culture.”

The Islamic Society of North America (ISNA), based in Plainfield, Indiana, is the largest Muslim organization in North America.