(August 26, 2014) – Former American President, Jimmy Carter, will be featured as a keynote speaker at the Islamic Society of North America (ISNA) national convention to be held in Detroit this weekend.

Carter will address the convention on the historic need for religious communities to mobilize against discrimination and violence that is directed toward girls and women throughout the world which is the subject of his latest book, A Call to Action: Women, Religion, Violence, and Power.

ISNA, the largest Muslim group in America, will hold its 51st annual convention at Detroit’s Cobo Center from Friday, August 29 through Monday, Sept. 1. The theme of the convention is “GENERATIONS RISE: Elevating Muslim American Culture.”

Muslim leaders at the convention will be invited to sign a Declaration for Peaceful Communities and join President Carter’s movement for greater human rights, according to ISNA. 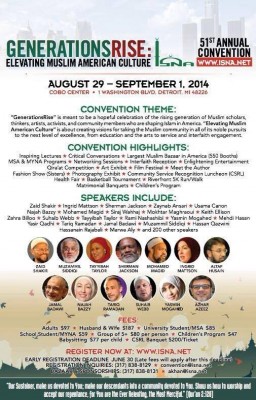 The convention is packed with plenary sessions and includes workshops on a variety of topics.

An Islamic Film Festival, an Art and Photography Exhibit, a National Qira’at Competition, a Matrimonial Banquet, Meet the Author sessions and Health Fair will be held, and there will be a bazaar and trade show with more than 400 vendors.

This year, ISNA will be providing convention attendees an opportunity to participate in Muslim-led projects supporting affordable housing and values-based community building.

In partnership with Dream of Detroit and Project HUG, attendees can participate in a 3-hour off-site service initiative that includes a brief “History of Islam in Detroit” visit to a Detroit Westside community, a tour of the HUDA clinic, as well as having the opportunity to directly contribute towards a locally driven Muslim-led neighborhood renewal initiative by working on urban gardening or housing restoration projects.

Another first-time feature of the convention will be the ISNA Detroit 2014 5K Run/Walk that will offer a scenic riverside tour and provide attendees from across the country a view of the best of Detroit.

The event will commemorate ISNA’s commitment to incorporating healthy living and family fun into the culture of the Muslim American fabric.

ISNA is a partner in American First Lady Michelle Obama’s Let’s Move Campaign. and a champion of health and wellness for the American Muslim community.

The organization is also planning to hold a town hall meeting during the convention, according to ISNA’s Executive Director, Hazem Bata.

“Give us your feedback, your insights, your concerns and, yes, your constructive criticisms,” he added. “ISNA is your organization – we are here to serve you and the community, so come tell us how best we can serve you.”