(January 30, 2014) – A center has been opened in the heart of downtown Toronto to promote intercultural and interfaith dialogue.

The grand opening ceremony of the Intercultural Dialogue Institute (IDI) Headquarters took place on Monday, January 27 with a ribbon cutting ceremony and featured a keynote speech by Ontario’s Minister of Citizenship and Immigration, Hon. Michael Coteau.

“I would like to congratulate the Intercultural Dialogue Institute for their work and for their commitment to really taking the steps towards building a global peace in Canada and across the world,” Hon. Michael Coteau told the gathering. “So I want to congratulate your organization on its ability to bring people together.

Intercultural Dialogue Institute is a non-profit organization whose stated purpose is to ‘advance social cohesion through personal interaction by promoting respect and mutual understanding among people of all cultures and faiths through dialogue and partnership.’

“Those conversations are necessary for us to move forward in Ontario with an agenda based on opportunity for all,” Minister Coteau added. “Congratulations on behalf of our government.”

The IDI Centre is located at 481 University Ave, Suite 711 at the St. Patrick subway stop on the University line in Toronto.

Dignitaries at the opening ceremony included politicians, civic and faith leaders who were treated to Turkish delicacies and an Art Exhibit. 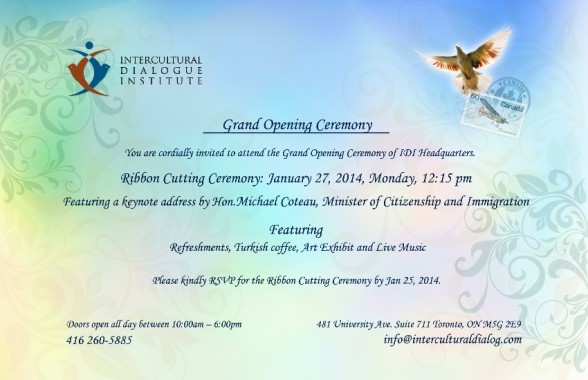 IDI was founded in 2010 by Turkish Canadians who are inspired by the teachings and example of popular Islamic reformist leader, Fethullah Gulen.

The organization currently has 11 chapters and regional office in major cities of five Canadian provinces.

IDI organizes a host of social, educational and cultural activities as well as programs for students and youth and intercultural exchange trips.

All of the rich programming and activities of the Intercultural Dialogue Institute aims “to promote enduring interfaith and intercultural cooperation, tolerance and dialogue,” according to the organization’s website.

“IDI aims to contribute to improvement of diversity, pluralism and multiculturalism throughout Canada.”