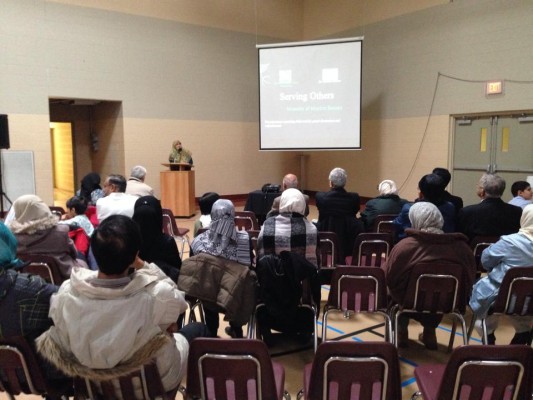 (December 16, 2014) – The life histories of Canadian Muslim seniors with extraordinary volunteer experiences should inspire us to follow in their footsteps, according to Dr. Katherine Bullock, President of the Tessellate Institute.

Dr. Bullock made the remarks at a screening of the documentary, Serving Others – Memoirs of Muslim Seniors, held at the Islamic Institute of Toronto on Saturday, December 13.

“This documentary profiles four outstanding Muslim seniors in our community,” said Dr. Bullock. “The goal of the project is to encourage volunteerism and the film will be focal point for discussions at events in the community.”

The documentary was produced by the Muslim Seniors Circle of Halton/Peel (MSC) in partnership with the Tessellate Institute and was funded by the Canadian Federal Government’s New Horizons for Seniors Program.

“The documentary is meant to do two things – first, we don’t have a very complete record of Muslims in Canada, so the documentary serves as a historical record of what Muslims have been up to since they emigrated here in terms of building institutions and providing services,” said Dr. Bullock in her introductory remarks. “Secondly, the documentary honors those who have been involved in volunteering.”

Following the screening, the four protagonists – Doris El Harchali, Hany Hassan, Wahida Valiante and Amjad Syed – featured in the documentary engaged in a lively discussion with the audience.

“The narratives will provide inspiration, guidance and mentoring for succeeding generations,” noted the producers of the documentary. “They will serve as lasting memorials of the generosity of spirit and dedication of those who spend their time in the service of others.”

The documentary was previously shown at the ISNA Centre and the Sayeda Khadija Centre in Mississauga.