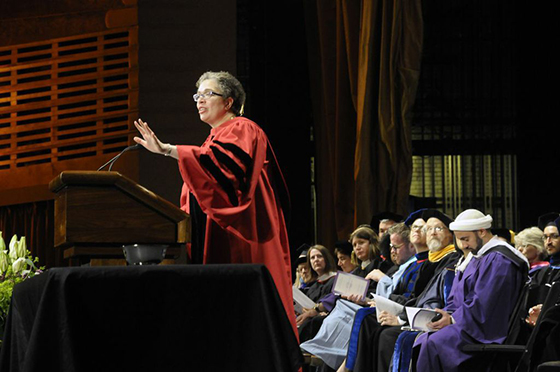 Imam Khalid Latif inspired new graduates and the entire audience at New York University (NYU) on Tuesday, May 20 as he recounted his 9/11 experience, living on-campus and in residence at the time.

In his motivating speech, Imam Latif reiterated the importance of collaborating despite differences in background or culture.

In 2007, Imam Latif’s position was fully institutionalized at New York University, and so he committed himself to that institution and the building of a Muslim life institution.

Today’s Islamic Center is a leader among American Muslim organizations, uniquely shaped to contribute to the future of Muslim practice in the West.

Imam Latif’s exceptional dedication and ability to cross faith and cultural boundaries on a daily basis brought him recognition throughout the city, so much so that in 2007, Mayor Michael Bloomberg nominated Imam Latif to become the youngest chaplain in history of the New York City Police Department. He was 24.

Since then, Imam Latif has dedicated himself to America’s largest Police Department, and has developed tremendously valuable skills as a spokesperson for co-existence, mutual understanding and productive relationships between cultures, communities and

Amongst many awards and distinctions for leadership and community service over the last few years, Imam Latif was most recently named one of 500 most influential Muslims in the world in 2009 by Georgetown University’s Prince Alwaleed Bin Talaal Center for Muslim-Christian Understanding and The Royal Islamic Strategic Studies Centre.