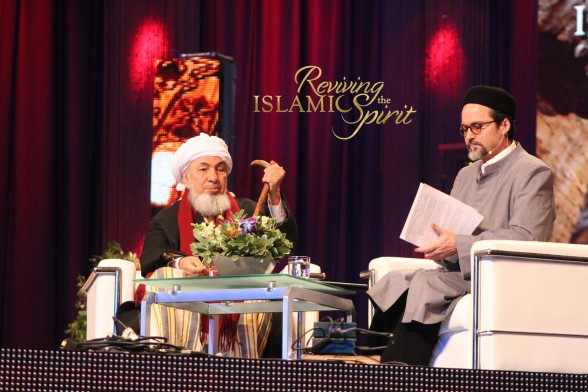 (December 28, 2014) – The Reviving the Islamic Spirit Convention concluded in Toronto on Sunday with an announcement by the well-known Islamic scholar, Shaykh Abdallah Bin Bayyah, of a new initiative that calls for a period without bloodshed as a relief from war.

“We seek a summer without bloodshed as a relief from war,” noted the statement read by American Islamic Scholar, Shaykh Hamza Yusuf, to the convention. “All of humanity’s children, young and old, deserve to enjoy a summer free of war, destruction and the slaughter of men by their fellow men.”

“Undoubtedly, such a break will allow the opportunity for all to stop and reflect as well as a chance to treat the wounded, bury the dead and provide escape from war zones for children, the elderly and anyone affected by the violence who seek safe refuge,” the statement continued.

Shaykh Abdullah bin Bayyah is one of the Muslim world’s most respected scholars, often referred to as a “scholars’ scholar” since many of his students are considered scholars in their own right.

In introducing the initiative, Shaykh Abdallah Bin Bayyah said it was appropriate that the statement should be launched in Canada at the Reviving the Islamic Spirit Convention.

The statement invokes the historical precedent of sacred months found in the Abrahamic traditions in which there was no bloodshed.

“We should consider reviving this Abrahamic practice affirmed by Islam in light of the existing conditions,” noted the statement. “As such, we ask everyone to join a unified call on behalf of all humanity, irrespective of their religious, ethnic or political affiliations.

“Our call upon them to start a new phase does not negate our desire for a world without war,” continued the statement. “Rather, this is a practical product of the realty we live in.”

The audience greeted the statement enthusiastically.

Shaykh Hamza Yusuf announced that, “this initiative came out of the Reviving the Islamic Spirit Convention and it is sponsored by the Forum for Promoting Peace in Muslim Societies based in Abu Dhabi in conjunction with Zaytuna College.”

The statement came following a weekend filled with sessions, some of which tackled the most pressing questions faced by Muslims in today’s world.

The convention has emerged as a major platform for some of the leading personalities from around the world to address one of the largest assemblies of Muslims in the western hemisphere.

The event has become a staple in Toronto’s downtown core during the Christmas holiday season and an estimated 20,000 people attended the convention this year.