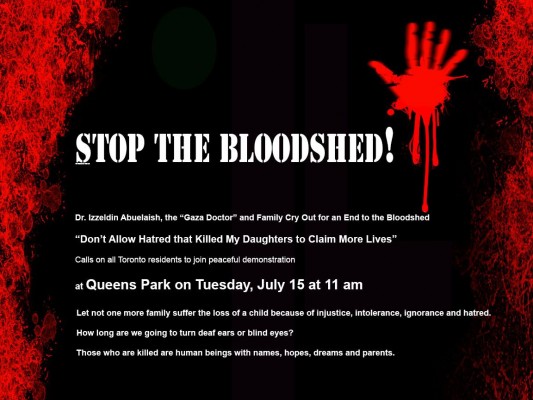 (July 14, 2014) – Dr. Izzeldin Abuelaish is calling on all Toronto residents to join a peaceful vigil at Queen’s Park on Tuesday to call for an immediate end to all hostilities in the Gaza Strip.

“I invite all residents of Toronto, regardless of faith or political affiliation, to join me and my children at Queen’s Park on Tuesday to call for an immediate end to all hostilities and stop the bloodshed of innocent people in the Gaza Strip,” says Dr. Abuelaish. “The life and blood of all is equal and precious and we all bleed the same color.”

“This is a call for an immediate cessation of hostilities. Let us stand together for the beginning of an era of hope where all people are free and safe. I will speak as a father and a physician to our leaders and to all Canadians of goodwill,” adds Dr. Abuelaish.

Dr. Izzeldin Abuelaish was at his home in Gaza on January 16, 2009 when an Israeli attack killed three of his daughters and a niece who were studying in their bedroom.

He moved to Canada in 2010 with his remaining five children to take up a teaching post at the University of Toronto’s Dalla Lana School of Public Health.

His powerful memoir, I Shall Not Hate, became an instant best seller in Canada and has since been translated into twenty-three languages.

“My family has paid the tragic price of injustice, hatred, ignorance, violence and fear,” says Dr. Abuelaish. “We are fortunate to live in the diverse and democratic society of Canada where people of goodwill can come together peacefully and call for tolerance, reconciliation and peace.”

“Let not one more family suffer the loss of a child because of injustice, intolerance, ignorance and hatred,” he adds.  “Only when good and decent people do nothing to protest injustice can extremists flourish.”