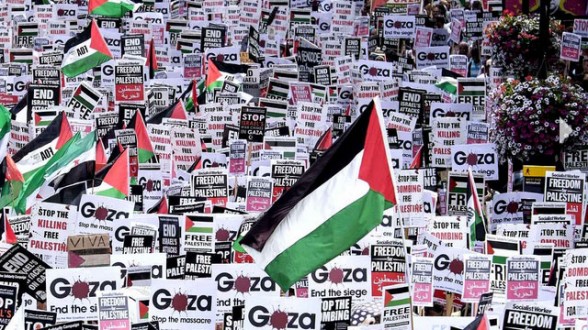 (August 3, 2014) – I have received numerous messages with the same question: “Is it Islamic to demonstrate?” I thought such a question was outdated but it does not seem to be the case, as some people claim to be scholars and confuse minds.

Some are asking for verses and prophetic traditions (ahadith) that would allow demonstrations. Actually the real proof lies with those who forbid it. The first principle in Islam, in social affairs, is permission and it is for those who prohibit protests to provide us with a verse or a clear tradition (hadith) banning demonstrations. It does simply not exist!

Some “scholars of power”, from Saudi Arabia to Egypt (and indeed historically under all despots), produce fatwas, with questionable interpretations and biased positioning, stating that the leaders (whoever they are) must be obeyed and therefore demonstrations are prohibited. Serving the despotic powers and States, installed and paid by them, these “scholars” produce legal opinions tailored for power. These are not Islamic fatwas by scholars, but political fatwas by courtiers.

What the Prophet (PBUH) said is pretty clear: “The best jihad is a word of truth before a tyrant, a despot.” This is exactly what those protesting in the streets are doing… they are speaking a word of truth where they live, where they are able to do so. It is a noble action, sometimes very brave because of the risks involved, and it is an action that is sometimes more a duty than a right.

One more point. We shall remember Moses and Aaron (PSE) before Pharaoh: “Tell him gentle words, perhaps he will remember or he will be moved, shaken.” There is a way of speaking : with firmness and gentleness, with courage and without violence. Gentleness and non-violence are indeed true courage: no insults, no vandalism, no racism. Dignified and powerful speech by women and men respecting themselves and their cause. As for those who vandalize or shout racist slogans, they express more their personal frustrations than they defend a cause. Or they are manipulated, or they are infiltrators trying to ruin the cause.

We should not be naive when organizing events: it is imperative to give every effort to be both heard and never instrumentalized or exploited. This is a requirement and a responsibility, but we must never be silent. In all circumstances, we need to remain wise and courageous. Simply put, … wise, and courageous.