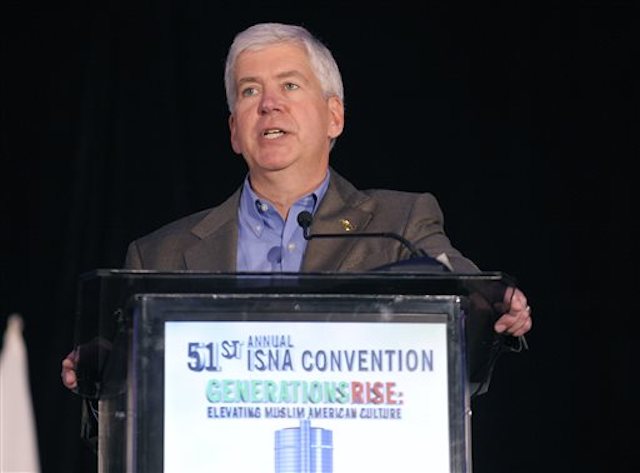 In his speech, Snyder affirmed Israel’s right to exist without making any mention of Palestinian human rights.

Yesterday, ISNA issued an action alert calling on its members to contact the Governor’s office over his remarks.

“Today the Islamic Society of North America (ISNA) called on its members, the American Muslim community and all those concerned, to contact the office of Michigan Governor Rick Snyder over his insensitive comments during the opening session of the ISNA 51st Annual Convention last weekend in Detroit, Michigan,” the organization stated in the release. “Unfortunately, near the end of his welcome remarks, Snyder unexpectedly affirmed Israel’s right to exist without any mention of Palestinian human rights. This was especially offensive in light of the recent massive deaths in Gaza due to Israel’s military campaign.”

“We urge everyone to contact Governor Snyder’s office and express that Palestinians also have the right to exist, be free on their land and to an immediate end of Israeli Occupation,” ISNA’s statement read.

Following Governor Rick Snyder’s speech, Dr. Hatem Bazian, a senior lecturer in the Departments of Near Eastern and Ethnic Studies at Berkeley University, issued a strong rebuke of ISNA’s response on his facebook page that generated debate in social media.

“What is more glaring is that no one on the stage jumped to make any comments after him to indicate that the implied insult conveyed by the Governor in his speech is not acceptable to the Muslim community and for the face that it to was expressed at this particular time considering the slaughter campaign unleashed by Israel on Gaza,” wrote Bazian. “Governor Snyder’s comments came on the heels of similar comments by President Obama during the White House Ramadan iftar when he stated that “Israel has the right to defend itself” to the gathered Muslim audience as if to score a political point at their expense and to teach a lesson on power to the gathered group while bombs are raining on Palestinians in Gaza.”

“Next time someone stands and speaks in a microphone provided and paid for by Muslims the basic demand should be that they respect the political, social and religious sensibilities of the community. Furthermore, Muslims organizing such gatherings should not only be happy for having one of our paid public servants address our community; rather we should be a dignified people and would have expected a woman or man in the organizing committee to have the courage to stand up and correct this insult taking place in the middle of our own momentary convention home. We had no control in the White House but this was our stage, microphone, people and invited guest but no one responded and no one took to the stage to speak in our voice; thus all Muslims became voiceless and erased from their own space,” Bazian added.