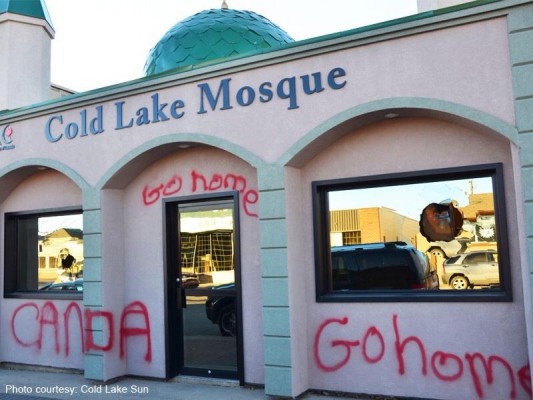 (October 24, 2014) – When news spread that the mosque in Cold Lake had been vandalized overnight, residents of the north-eastern Alberta city showed up to express their disappointment and to scrub off the hate messages and repair the house of worship.

The MAC Islamic Centre of Cold Lake was vandalised, with its windows smashed and the graffiti “go home” and “Canada” were spray-painted on the exterior of the building.

Cold Lake residents scrubbed off the hate message and replaced them with posters reading, “Love your neighbour” and “You are home.”

“I just came to help these guys get it off the building and bring them supplies, a ladder, graffiti remover,” Nikki Williams, a Cold Lake resident, told Global News. “The people who go to this mosque, I’ve been born and raised with since I was a little kid. This is their home.”

“We don’t condone this at all. We’re a very tight community – the Muslims along with every other religion in this town – Cold Lake is their home.”

The vandalism was discovered on Friday morning by Mahmoud El-Kadri, a director at the mosque, when he arrived for the early morning prayer at 6 a.m.

As soon as Mayor Craig Copeland heard of the vandalism, he drove over to the mosque to offer support to the Muslim community.

The mayor says that his community is upset at the desecration of the house of worship.

“All of Cold Lake is rallying around the mosque and the Muslim community,” he said.

“So many people from Cold Lake were coming up to them and apologizing and saying this by no means represents Cold Lake… There were actually several people in tears.”

“It’s undemocratic and un-Canadian,” said Leskiw. “It’s unbelievable. It floors me. I’m so upset by this.”

Jason Kenney, Minister for Multiculturalism, issued a statement condemning the act of vandalism against the Cold Lake Mosque.

“Earlier today vandals spray painted the Cold Lake Mosque in Cold Lake, Alberta with hate messages,” said Minister Kenney. “This cowardly act is unacceptable and has no place in Canada.”

“Canada is a strong, peaceful, pluralistic nation, and Canadians will not stand for crimes of intolerance and bigotry against anyone,” he added. “As Minister for Multiculturalism, I call on Canadians to firmly reject this and any other cowardly expressions of hatred against Canadians of any faith.”

Residents, including soldiers, have been showing up at the mosque throughout the day to offer support to the Muslim community.

“These guys are peaceful, and I think it’s important for the community to show them that we know the difference between extremists and a religion,” Cold Lake resident Matt Downy told Reuters, bringing a vase of flowers to the mosque.

“I had calls from all over Canada, from Vancouver, from Ottawa… Toronto… Edmonton,” added El-Kadri. “When I came this morning and I felt the support of Cold Lake, I really forgot what happened.”

“I forgot the windows, I forget about the writing… It made me feel like I am one of the Cold Lake people.”

The Muslim Association of Canada (MAC), which administers the mosque, issued a statement thanking the residents of Cold Lake for the overwhelming support.

“Today, we received an overwhelming and heartfelt response of support from friends across the community who assisted in a clean-up following an overnight incident at the local Mosque,” stated the organization. “We’re extremely grateful for the support. It is a reminder of the great country we live in and the values that we, as Canadians, hold dear.”

Meanwhile, Canadians are taking to social media to offer support to the Muslim community and thank residents of Cold Lake.

“This is why Canada is truly an Abode of Peace,” tweeted Ingrid Mattson.

The RCMP is investigating the incident and police are asking Muslims who fear for their safety to contact them.

[With files from News Agencies]