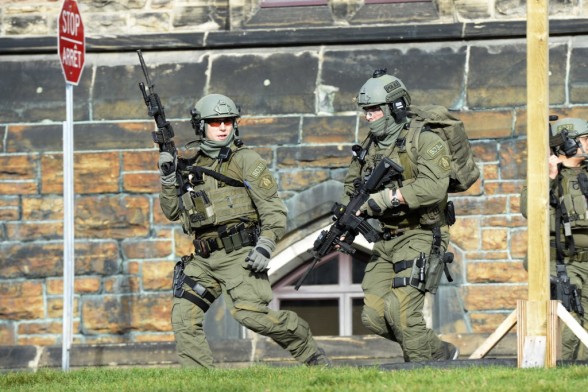 [This story continues to be updated, as more details are available – last update: Oct. 23 at 9:50pm]

(October 22, 2014) – Muslim leaders are joining with Canadians across the country in expressing their shock and condemnation of today’s attack on the Parliament buildings and National War Memorial in Ottawa which killed an honor guard and injured two people.

The slain soldier is Nathan Cirillo, 24, a reservist serving in Hamilton from the Argyll and Sutherland Highlanders of Canada regiment.

The dead shooting suspect, killed by the House of Commons Sergeant-at-Arms, has been identified as Michael Zehaf-Bibeau, a Canadian born in 1982. News agencies are reporting that Zehaf-Bibeau was a Montreal resident who had a criminal record in Quebec dating back 10 years on some drug-related charges. He was also charged with robbery in 2011 in Vancouver. Reports say that he had recently converted to Islam.

“This is a very sad and disturbing situation for all Canadians,” the Muslim Against Terrorism and the Islamic Supreme Council of Canada said in a press release. “The Canadian Muslim community stands with the Canadian government and supports all the efforts to identify and capture the terrorists. Once again our thoughts and prayers are with the victims and their families.”

Community leaders and organizations issued reaction to the incident on social media.

“Our sincere condolence and sympathy go to the family of the brave soldier shot at War Memorial in Ottawa,” said Dr. Hamid Slimi, a Toronto-based Imam.

“Regardless of who did it and why, we all stand united in keeping Canada safe and free for all,” tweeted Kanata’s Imam Sikander Hashmi.

“All Canadians are horrified and shocked by these repulsive attacks in Ottawa and our thoughts and prayers are with the victims and their families today,” said National Council of Canadian Muslims (NCCM) Executive Director Ihsaan Gardee.

“We stand firm with fellow Canadians in upholding and protecting the safety and security of our country, as well as our national institutions. We commend our law enforcement agencies for putting themselves in harm’s way in order to protect all of us from terrorism.”

The Muslim Association of Canada (MAC), a national organization, also issued a statement condemning the attacks this week.

“MAC would like to offer its condolences to the victims of violence over the past week,” according to the statement.  “We are horrified by these acts of violence, especially in the Parliament of our nation’s capital; we stand with all Canadians in condemning these attacks and seeking justice for those responsible.”

“MAC strongly rejects any threats against the safety and security of Canadians, and we consider it a civic duty on all to oppose such threats.”

The Muslims of Ottawa-Gatineau issued an open letter to community members stating, “We stand shoulder-to-shoulder with our fellow citizens in unequivocally condemning these heinous and cowardly acts which affect all of us.”

“We will continue to do our part to ensure our shared security,” added the statement. “We must not allow these attacks to divide us and we call on all Canadians to join us in working to preserve the safety and freedoms upon which this country was built.”

The Intercultural Dialogue Institute, an organization founded by Turkish-Canadian Muslims stated in a media release, “We believe that we must unite as one human race against terrorism, violent extremism and murderous ideologies to prevent these types of attacks from recurring in the future.”

“Such acts cannot be justified under any circumstances or on any pretext whatsoever,” noted the statement. “They not only run counter to the teachings of Islam but are diametrically opposed to the fundamental character and ethos of this religion. Those who harm others in the name of religion in fact grievously dishonour it.”

In a statement issued Thursday by the Canadian Council of Imams, they stated, “As religious leaders of the Islamic faith in Canada we join our fellow citizens in strongly condemning these recent terrorist attacks.  We once again reiterate our past declarations condemning violent extremism and underscoring Canadian Muslims’ commitment to the safety and security of Canada.  This includes a warning to Canadians about ISIS and its deviant nature.”

On Wednesday night, a group of citizens came out to lay a wreath at the Streetsville Cenotaph in Mississauga.

“It is to express our sadness and outrage at what happened in Ottawa today,” said community leader, Omar Alghabra. “Regardless who the terrorist was, we will stand in condemnation of this heinous act.”

On Thursday, a prayer and wreath ceremony was held by the Muslim Council of Greater Hamilton at the armoury in the city at 2:30 p.m.

“Our thoughts and prayers are with the family of Corporal Nathan Cirillo and all others who were injured in the attack,” said Dr. Ali Taher Ghouse, President of the Muslim Council of Greater Hamilton. “We endorse the declaration today made by the National Council of Canadian Muslims, and stand firm by our fellow Canadians to uphold the safety and security of all Canadians and our institutions.”

“Muslims across Canada appreciate the ability to practice their faith in peace,” said Sayed Tora, Imam of the Hamilton Downtown Mosque. “This small group of criminals who ascribe to violent and radical ideologies are not part of Islam.”

The Islamic Society of North America (ISNA) stated in a press release, “Our thoughts and sympathies go out to the family and friends of the victims of these horrific acts. We extend our deepest condolences to them as words cannot express the sadness we feel over the loss of innocent lives.”

“We appreciate and support the work of our law enforcement agencies in their tireless efforts to make Canada a safe place for all.”

The Islamic Circle of North America (ICNA Canada) issued a release that stated, “On behalf of Muslim Community of Canada, we condemn the attack in Ottawa today that killed soldier Cpl. Nathan Cirillo. “

“We share their pain, feelings and sympathize with the family of deceased soldier. We applaud law enforcement agencies in Canada for controlling the situation that could have resulted in more casualties. We also urge everyone to expose any person who would cause harm to fellow Canadians in any form.”

During an address tonight to the nation from an undisclosed location, Prime Minster Stephen Harper said the incident in Ottawa was a ‘terrorist’ act.

“Canada is not immune to the types of terrorist attacks we have seen elsewhere around the world,” Prime Minister Harper said.

“They will have no safe haven,” he said. “Together we will remain vigilant against those at home or abroad who wish to harm us.”

Thomas Mulcair, leader of the official opposition, said he stands shoulder to shoulder with the Prime Minister.

“At this moment Canadians are unified in grief and stricken with disbelief,” Mulcair said. “Canada is shaken today but we shall not waiver. We woke up this morning in a country blessed by love, diversity and peace and tomorrow we will do the same.”

“This attack is unforgivable,” said Liberal Leader, Justin Trudeau. “Should any other perpetrators or co-conspirators exist, they must be caught and be punished to the full force of our laws. I’ve extended an offer of full support to the government, along with any assistance members of our party can provide at this time.”

“To our friends and fellow citizens in the Muslim community, Canadians know acts such as these committed in the name of Islam are an aberration of your faith,” added Trudeau. “Continued mutual cooperation and respect will help prevent the influence of distorted ideological propaganda posing as religion. We will walk forward together, not apart.”

In Ottawa and Toronto, the Police Service sent out messages to local community and Faith leaders assuring them of their commitment to the safety of residents.

“As the events unfold on Parliament Hill and the downtown core, it is incumbent upon us as a police service to be aware of how this incident may have an impact on our local communities,” said Ottawa Police Chief Bordeleau in a communiqué.  “We understand that the recent tragic event in St. Jean de Richelieu and today may be very challenging for members of our communities, and that this incident may exacerbate these challenges.”

“The Ottawa Police Service has a long standing collaboration with our various faith and communities leaders that have allowed us to build strong and positive relationships,” added Chief Bordeleau.  “With this in mind, I want to take this opportunity to reiterate my commitment to ensure the safety of all of our communities.”

“If at any time, you or a member of your community feels that there is a life-threatening emergency or crime in progress, you are strongly encouraged to call 9-1-1.  For all other non-emergency crimes, or for general inquiries, your are encouraged to call 613-236-1222,” noted the communiqué.

In Toronto, the Chief’s Muslim Consultative Committee issued an advisory to community organizations.

“I have asked our Divisional Unit Commanders to deploy their officers to those institutions (military and religious), infrastructure or symbolic targets and to pay special attention as well,” stated Mario Di Tommaso, OOM, Staff Superintendent – Central Field Command.

“This means that you will be seeing heightened patrols and checks of your respective mosques,” added Supt. Di Tommaso. “I am asking you to relay to your mosques and their Imams, that we as a Service, are aware that your mosques may be vulnerable to a backlash from those who have linked this attack to Islamic Extremism, and that is why we are increasing our patrols.”

A sad day for Canada

Tonight, police and other officials in Ottawa will not say if they are looking for any more suspects but they are telling people to be vigilant.

Ottawa police confirmed they had a call at 9:52 a.m. with a report of shots fired.

The rifle-wielding gunman, after shooting the honor guard at the War Memorial, Cpl. Nathan Cirillo, moved up the street to launch an attack on nearby Parliament Hill.

The House of Commons Sergeant-at-Arms, 58 year-old Kevin Vickers, killed the gunman in the parliament buildings.

The sergeant-at-arms is responsible for safeguarding the authority of the House of Commons, as well as the safety and security of the Parliament Buildings.

Canadian Prime Minister Stephen Harper was rushed away from the parliament building to an undisclosed location.

The shooting put all federal government buildings into lockdown and police urged people to stay away from the downtown core of Ottawa.

Across Canada, military bases were put on alert and soldiers have been cautioned about wearing uniforms in public.

A witness, Tony Zobl, described the incident to the Canadian Press News Agency.

“I looked out the window and saw a shooter, a man dressed all in black with a kerchief over his nose and mouth and something over his head as well, holding a rifle and shooting an honour guard in front of the Cenotaph point blank, twice,” Tony Zobl told The Canadian Press.

“It looked like the honour guard was trying to reach for the barrel of the gun,” said the witness. “The honour guard dropped to the ground and the shooter kind of raised his arms in triumph holding the rifle.”

Second attack in a week

It was the second attack in Canada this week. On Monday, Martin Couture-Rouleau, who had converted to Islam last year and took the name Ahmad Rouleau, rammed his car into the two Canadian Forces members.The 25-year-old Couture-Rouleau was shot and killed after a car chase by Quebec police.

The RCMP investigated Martin Couture-Rouleau for four months as they suspected he had become radicalized. The RCMP arrested him when he tried to fly to Turkey this summer and seized his passport. However, the police did not have enough evidence to charge him.