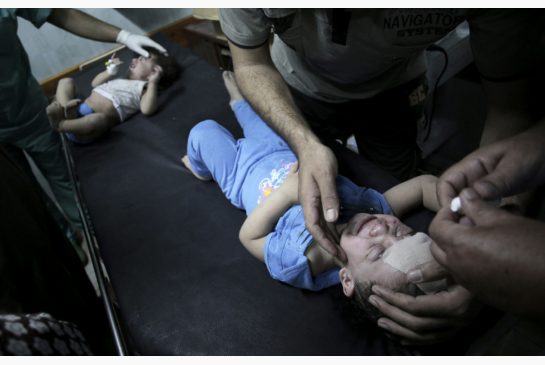 I am writing today to appeal to you, to all Canadians, to invite 100 children from Gaza, the place where I saw three daughters and a niece die because of violence, to be treated here in Ontario. Let’s take these young Gazans, innocent as my own children, out of harm’s way.

The population of the besieged Gaza Strip is mostly women and children. Fifty per cent are children under 16 years old and 20 per cent are women of reproductive age. At the moment of writing this article, some 1,359 Palestinians have lost their lives in the current conflict with Israel, mostly women and children, and some 7,677 have been severely wounded. More than once in recent weeks, I have read a news article or turned on the television and learned of the death of someone I know.

The pain has been intense and unrelenting, the wound is deep and the scar is broad and the peace is never long enough for it to fully heal. But as distant as the conflict may seem to some in this country, we can help the healing.

In this moment, we must all don the robe of humanity. It is a time to stand together as Canadians, Palestinians, Arabs, Muslims, Jews, Israelis and Christians as one soul. We must show that none is ignored or considered unworthy of a secure and prosperous life.

As Martin Luther King said, “Our lives begin to end the day we become silent about things that matter. In the end we will remember not the words of our enemies but the silence of our friends.”

There are many severely wounded children in Gaza and the hospitals and health-care personnel there are woefully ill-equipped to treat them all. I would like to see our world-class Toronto hospitals offer to take in 100 of the most seriously wounded. This would be a purely humanitarian effort, a way to demonstrate the Canadian values of peacemaking, diversity, tolerance and outreach to those in need, and to set an example to other cities, provinces and countries.

Most of all, it is a way to restore hope to the suffering Palestinian families and beyond.

Kingston General Hospital has already said that it will accept these children, as has Sick Kids Hospital in Toronto. The Registered Nurses’ Association of Ontario, too, supports the initiative. Will the federal and Ontario governments now do the same?

I urge all hospital administrators and the political, diplomatic and corporate leaders who can help make this mission a reality to show the humanity and resourcefulness that define this city and this country. We have a responsibility as humans to do what we can to save the innocent youth of Gaza and to hasten a peaceful resolution, together.

As a father and a physician, despite the pain I have witnessed and experienced, I do not give up hope. As long as the patient is alive, as the wounded children in Gaza are, hope is part of the physician’s job. Health care has the potential to be a catalyst in the peace process, to remind us of our shared humanity, the preciousness of life and the possibility of salvation.

Surely, wherever we are and whatever we believe, we can unite around the common cause of saving these children. The smile of a healed wounded child is a smile of hope, a smile from the heart, whether it comes from a young Canadian, Palestinian, Israeli or American. I know this from my own bitter experience.

In coming to Canada I found my faith and belief strengthened in a nation historically known as a peacemaker and peacekeeper, a country whose values are not just rhetorical, but are embodied in our actions. By accepting these children, by caring for the young of another, even for a short time, we will demonstrate to the world our hospitality and generosity, and teach an important lesson: that people can peacefully share land, resources and love. That bound by our shared humanity, we can together find solutions to our challenges and give dignity to all people.

Dr. Izzeldin Abuelaish is a Palestinian physician and the author of I Shall Not Hate: A Gaza Doctor’s Journey, a memoir about the loss of his three daughters, Bessan, Mayar and Aya, and their cousin Noor to Israeli shelling in 2009.

(This op-ed was originally published in the Toronto Star and is re-published here with the permission of Dr. Izzeldin Abuelaish).