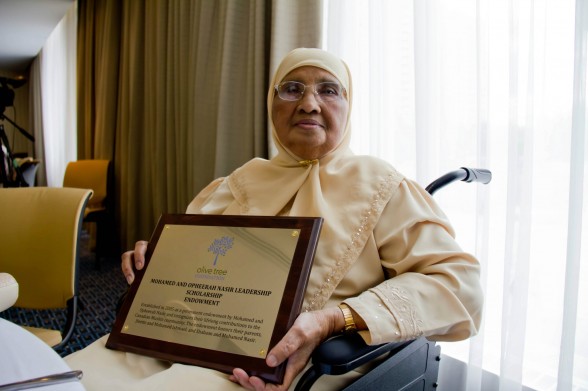 (November 11, 2014) – Opheera Nasir, a pioneer member of the Canadian Muslim community and wife of late Mohamed Nasir, former president of the Islamic Foundation of Toronto, passed away on Monday evening, November 10.

“It is with great sadness that we announce the passing of Sr. Opheera Nasir, mother of Br. Muneeb Nasir – a founding member and first President of IIT,” a statement sent to OnIslam.net from the Islamic Institute of Toronto (IIT) read.

“We pray that Allah grants the family patience to bear their loss and gives them solace and comfort in this time of grief.”

At the age of 88, Opheera Nasir passed away peacefully on November 10.

The Janaza will take place on Tuesday, November 11 after Zuhr prayer at 1 pm at the Islamic Foundation of Toronto in Scarborough.

Muneeb Nasir, OnIslam.net Canada correspondent, is the President of the Olive Tree Foundation and Managing Editor of the online IQRA.ca magazine.

Opheera was the wife of the late Mohamed Nasir, former President of the Islamic Foundation of Toronto, and one of the pioneers in the development of the Muslim community in Toronto.

She was the fourth child of the well-known Guyanese Muslim leader and Imam, Mohamed Ahmad Nasir of the Vreed-en-Hoop Masjid and Shaban McDoom.

On immigrating to Canada in 1973 with her husband and family, Opheera Nasir became actively engaged in public service with the Islamic Foundation of Toronto, the Jami Mosque and the MSA Women’s Committee.

The late pioneer was a pillar of the Islamic Foundation community in its early history, mentoring younger women and organizing educational seminars, youth camps and cultural events. She accompanied her husband, the late Mohamed Nasir, in his extensive travels in the Muslim world in the 1980s and 90s, in support of the Islamic Foundation‘s project.

She served as the Canadian Zonal Representative of the MSA Women’s Committee in the 1970s and was also actively engaged in the Jami Mosque and ISNA communities.

In 1991, the Ontario Women’s Directorate recognized Opheera Nasir for her `contributions as an advocate of women.’

The award stated, “the decoration is a reminder of the values of service, individual respect and community effort on which Canada was built and on which its quality of life will always depend.”