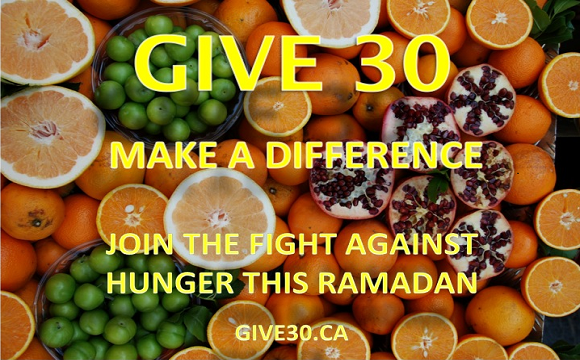 (June 16, 2014) – A national hunger-fighting campaign that taps into the spirit of the Ramadan is growing faster in Canada than anticipated.

“The Give 30 Campaign is a grassroots movement that’s catching on much faster than ever imagined,” says Give 30 founder Ziyaad Mia. “This year, Give 30 grows again, with nine food bank partners across 5 Canadian provinces.”

As Ziyaad Mia, a Toronto lawyer and social activist, washed his coffee cup the day before Ramadan in 2012, he thought to himself that he wouldn’t be seeing much of that cup for the next 30 days.

From that simple act came the idea for the Give 30 Campaign that has raised tens of thousands of dollars for food banks and inspired countless people to give.

Give 30 is designed to motivate people fasting in Ramadan to donate a portion of the money they save by skipping meals over the month.

People who aren’t fasting can also take part, says Ziyaad Mia, noting that donations over the past two years have come from people of all faiths and backgrounds.

“Brown bag your lunch for the month or tally up 30 days of coffee money,” urges Mia. “Whatever it is, it can make a difference in the lives of those who don’t have enough to eat.”

The annual study by Food Banks Canada shows that more than 833,000 people relied on food banks with more than a third of them being children.

“Despite prosperity in our city, hunger continues to be a challenge for some of our neighbors,” wrote Gail Nyberg, Executive Director of Toronto’s Daily Bread Food Bank in a letter of appeal to the city’s residents. “This is why we need your support once again.”

Food banks across Canada are gearing up to take part in the national initiative that launches its third annual campaign this week.

Ziyaad Mia attributes the significant growth of the campaign to the simplicity of the idea and the power of social media.

“Ramadan is about giving, building community, and understanding the challenges of hunger, “says Mia.

That is why it works well motivating people to give.

“Everyone can participate in the spirit of Ramadan,” Mia emphasizes. “Hunger touches all types of people and that’s why it’s important for everyone to join Give 30.”

Ramadan is expected to begin on Saturday, June 28 in Canada.

In Ramadan, adult Muslims, save the sick and those traveling, abstain from food, drink, smoking and sex between dawn and sunset.

Muslims dedicate their time during the holy month to be closer to Allah through prayers, self-restraint and good deeds.

It is customary for Muslims to spend part of the days during Ramadan studying the Noble Qur’an.