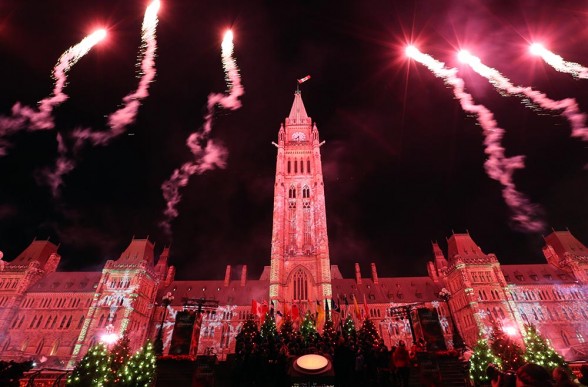 (December 23, 2014) – Canada’s Muslims are using their time off during the Christmas holiday season for family gatherings, community programs and to volunteer with charities.

“The Christmas holidays are a time when Canadians of all backgrounds and religions have the opportunity to think about what’s important to them, and to spend time with their loved ones,” Amira Elghawaby, Human Rights Coordinator at National Council of Canadian Muslims (NCCM), told IQRA.ca. “While it is a religious holiday specific to Christians, as Canadians we all benefit from thinking more about the overall well-being of our families and communities.”

Christmas can pose a challenge for Canadians of other faith traditions who do not celebrate the occasion.

“It is important to also recognize that there are families, or individuals, who come from Muslim majority countries where Christmas is not celebrated in the same way – if it is celebrated at all,” Ihsaan Gardee, Executive Director of the National Council of Canadian Muslims (NCCM), told IQRA.ca. “They may not be used to the festivities, or the highly commercialized nature of the holidays.”

“This may also concern Canadian Muslim families who are struggling to inculcate a love for their own faith tradition in their children,” added Gardee. “Families and communities may feel at a loss when trying to create a similar level of excitement around their own faith and cultural celebrations.”

The time of year can be especially difficult for families with young children who may feel excluded from the festivities.

“Growing up here, I felt very excluded at this time of the year and December 25th was the most boring day of the year – I dreaded it,” said Rabia Khedr, Executive Director of the Canadian Association of Muslims with Disabilities (CAM-D). “After entering university, I had a bunch of friends who are Muslim and we would always plan a potluck or something to hang out at someone’s house together.”

“After marriage and having kids, we always did some sort of family gathering,” Khedr added.

Many mosques and organizations across Canada organize family retreats, youth camps, dinners and conventions during the winter break.

Reviving the Islamic Spirit Convention in Toronto has become a much-anticipated gathering during the Christmas holiday season for families across the country.

Over 20,000 attendees come from all over North America to attend the convention.

“We look forward to this time of the year because of RIS,” said Rabia Khedr. “The years that RIS hasn’t been on Christmas Day, we have hosted a lunch with our convert friends who say that this day is often a void in their lives.”

“They appreciate having something to do because, otherwise, they miss the celebrations with family.”

At the Islamic Institute of Toronto, an annual winter dinner is held on Christmas day to provide an alternative activity for families, children and new Muslims.

In recent years, Muslims are joining with other Canadians in volunteering with charities to help the vulnerable which Amira Elghawaby thinks is a central theme of Christmas that all Canadians should embrace.

“Christmas time is often when churches and charities double up on their efforts to help those who are less fortunate and Canadian Muslims should join in helping alleviate the hardships faced by members of our wider communities,” said Elghawaby. “Compassion, mercy, and a sense of collective responsibility are values we share with people of all faith traditions and backgrounds.”

Ihsaan Gardee thinks that the season and Canada’s pluralistic society offers a unique opportunity for people to appreciate the universal values shared by all religions.

“We are blessed to live in a democratic country with freedom of religion,” said Gardee. “Despite our theological differences, we can all agree that the values of charity, compassion, and the Golden Rule that the holiday is at its core all about, are universal.”