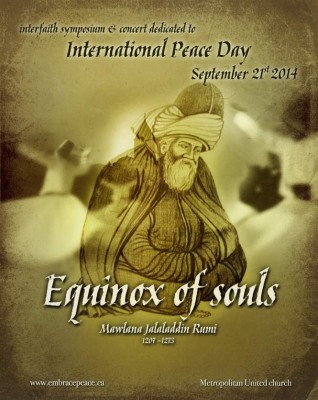 An Interfaith symposium and concert will be held on Sunday, September 21 at Toronto’s Metropolitan United Church to mark the International Day of Peace.

The event is sponsored by the Metropolitan United Church, the Holy Blossom Temple, the Intercultural Dialogue Institute and the Peace and Social Justice Foundation.

“This event aims to raise awareness around building bridges among communities and nurturing the culture of non-violence, intercultural/interfaith cooperation, and humanitarian action as we break bread together over a special medieval menu,” noted the organizers in a press release.

Each year the International Day of Peace is observed around the world on 21 September. The United Nations General Assembly has declared this as a day devoted to strengthening the ideals of peace, both within and among all nations and peoples.

Archbishop Colin R. Johnson of the Anglican Church of Canada will be the guest speaker at the supper that will feature a special medieval meal.

“Each year, on this day, the United Nations calls for a global ceasefire.  We ask combatants to put down their arms so all can breathe the air of peace. Armed conflict causes untold grief to families, communities and entire countries. Too many are suffering today at the brutal hands of warmongers and terrorists. Let us stand with them in solidarity,” said UN Secretary General, Ban Ki-moon in his message marking the International Day of Peace.

For further information about the event and to register, visit: www.embracepeace.ca