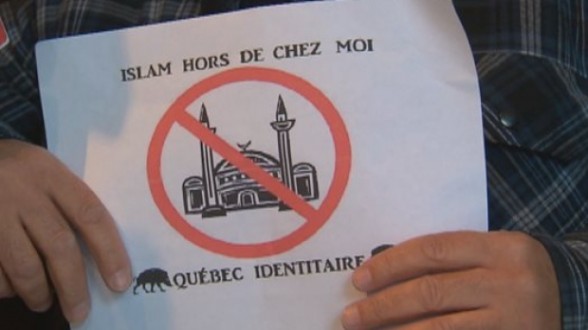 (November 10, 2014) – Three Quebec City mosques were targeted over the weekend with signs reading “Islam hors de chez moi” — Islam out of my country — pasted on the mosques’ doors.

The three mosques desecrated were in the Limoilou neighbourhood, the Islamic Cultural Centre of Quebec City in Ste-Foy and the capital city mosque in Quebec City.

A group named Québec Identitaire was written on the posters.

Khalil​ Bahji, who attends the Limoilou mosque, told CBC News that he and his fellow congregation members are saddened by the attack.

An administrator at another mosque said they have handed over a security tape to police showing two people putting up signs on their door.

The administrator told Radio-Canada that he believed they were isolated incidents and that he wasn’t worried, shrugging it off as an unfortunate incident of cultural ignorance.

“While these types of acts are hurtful, Canadian Muslims know they do not represent the views of the vast majority of their fellow citizens.  We call on authorities to investigate these incidents as hate crimes so that a clear message is sent that these acts have no place in our communities,” said the National Council of Canadian Muslims (NCCM) Executive Director, Ihsaan Gardee.

“We also need to hear from all levels of government and from our community leaders that we all stand united against hate. Canada is a multicultural, pluralistic country which is strengthened by its diversity.”

The incidents are the latest in a spate of anti-Muslim harassment and vandalism that have been documented since the tragic attacks last month in Ottawa and Saint-Jean-Rue-Richelieu.

Other incidents which have been reported include the vandalism of several mosques including one in Cold Lake, Alberta, as well as the anti-Muslim harassment of municipal candidates in Toronto, and threats to the BC Muslim Association.

According to  NCCM, they are currently following up additional cases of possible hate crimes and incidents targeting individuals and organizations.

“We urge community members to remain vigilant and to immediately report suspicious behaviour to the proper authorities, as well as to the NCCM, in order to establish a clear record of such incidents,” added Ihsaan Gardee.