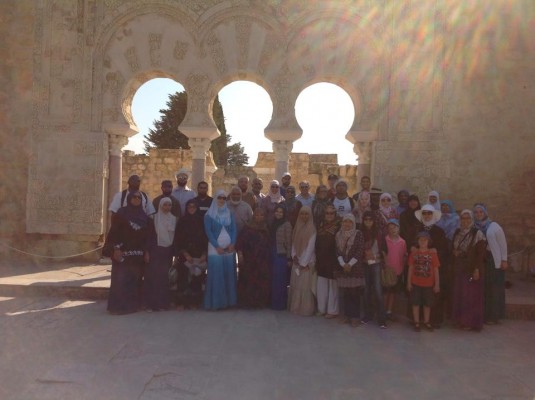 On Aug 14, 2013, 47 people from around the world met at Malaga-Costa del Sol Airport in Malaga, Spain and set out on a six day tour to discover Islamic heritage in Spain – a tour that was very educational and eye opening, but also saddening.

Andalucian Routes, an organization based in the UK and now with a new office in the historical city of Granada in Spain, has been organizing and conducting these educational tours to highlight, inform and educate Muslims and non-Muslims alike on the Islamic history in Spain.

Through carefully prepared visits to what remains of Muslim heritage sites throughout Cordoba and Granada, as well as through meeting local Spanish Muslims in their communities, participants gained a deep and meaningful understanding of the Muslim presence in Andalusia. 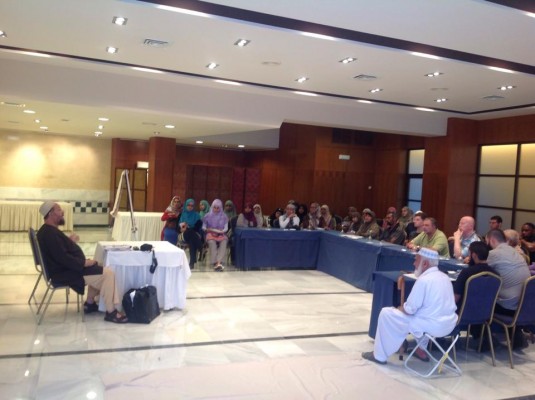 From Malaga, we departed for Cordoba, arriving there in the night. Finding halal food is a challenge throughout Spain, and we later learned that this is due to the historic practices of the Inquisition, when efforts were made to eliminate Islam in the region. We walked to a nearby Plaza where there were two Muslim-owned restaurants.

The next morning after orientation, we departed for the legendary Great Mosque of Cordoba. The morning temperature was slowly rising, and by noon it peaked to 45 Celsius. This was the largest masjid in the World during its time. Its architecture is amazing: beautiful arches, and walls adorned with Quranic verses around the Mehrab. It is no longer a Masjid. During the Inquisition, it was converted to a cathedral and the grounds of the structure were used as burial grounds for priests. Muslims are forbidden to pray in the building today.

As we exited the building, many of us had to fight tears after witnessing one of the most brutal examples of intolerance by the Spanish Monarchs with the full support of the Vatican.  As was the case throughout our tour, our moments of sadness were often soothed by stories of hope. We learned that some of the local Muslims opened a Masjid nearby and started calling out Adhan from loudspeakers. The church authorities opposed it, but the residents in the neighbourhood approved of the Adhan and demanded its practice be continued.  The local Spanish residents of Cordoba have an appreciation for the Adhan, regardless of their faith.

Near the Masjid stands Calahorra Tower, an old Muslim fortress. It used to be an abandoned building before being converted to a Museum. The purpose of the tower today reminds us that Allah wants people to be informed of the Islamic heritage of Spain.

In spite of attempts to cover it up for centuries, Allah inspired Roger Garaudy, a French revert to Islam and a former member of the French Communist Party in the French Parliament, to convert this abandoned tower into an interactive Museum of Islamic History – the Al-Andalus Living Museum.

Its four floors have a cavernous structure and serve as living monuments of Islamic history. Every floor is an artistic display of Islamic heritage in Cordoba between the 9th and 13th centuries. Visitors can wear headphones and listen to running commentary to hear explanations for each exhibit. 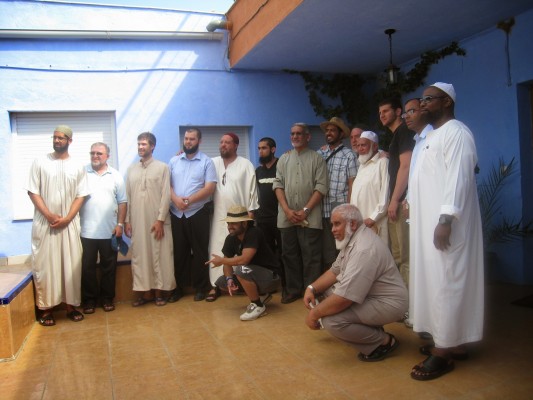 We returned to the hotel for an afternoon siesta and in the evening we were invited by a local Spanish Muslim family for dinner and a visit to their Masjid. The location of this Masjid – in a downhill cul-de-sac, hidden by trees – had us all wondering whether it was there for avoiding visibility, or because it was available land. The Adhan was called loud and clear over the land, and we prayed Maghreb Salat, led by a Spanish Muslim, and were served a very sumptuous dinner. 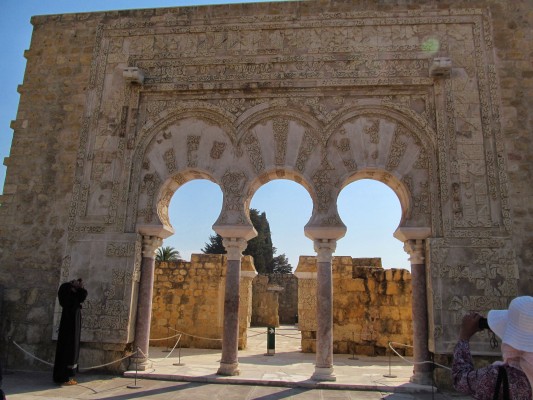 The next day, we went to Madinat Al Zahra, an archaeological site of the first planned City built by Abdur Rahman III when he proclaimed himself as Caliph in 929AD. He built this as a personal residence and headquarters of the new administrative organ of the new Caliphate state, outside of Cordoba. Currently only a tenth of the intramural city is excavated. 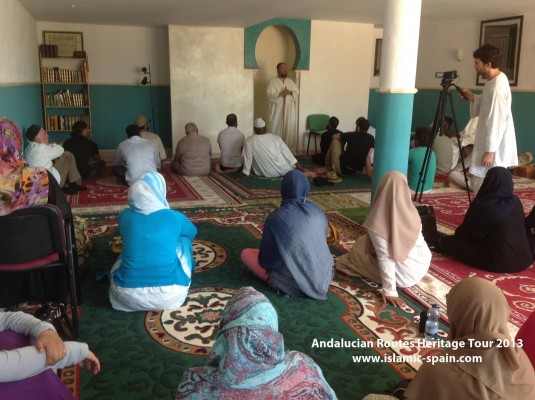 As it was Friday, we returned to the hotel and later left for Salatul Juma at the same Masjid we visited the previous day. Shaikh Abdullah Hakim gave the khutba and led the Salat. After, we were served another delicious meal by the host family. 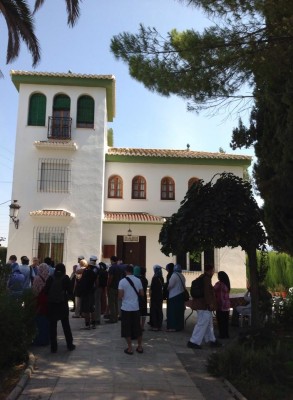 The next day, we departed for Granada. On the way, we stopped to visit and pray Zuhr at another Masjid started and maintained by Spanish Muslims. The Imam is of the early Spanish converts to Islam and a renowned ceramics artist and exceptional craftsman. He runs his factory and showroom beside the Masjid.  This Masjid is located across the very mountains that Tariq ibn Ziyaad came through in the early 8th century when he brought Islam into the lands of Spain.

We reached Granada in the late afternoon and our evening dinner was hosted by a Muslim restaurant owner. The next morning, we went to visit the Alhambra.

Alhambra, or Al Hamra in Arabic, is perhaps the only living monument preserved, that retains most of its originality. The reason for this level of preservation could be that it was not a place of worship, or a symbol of Islam, except for Quranic calligraphy on its walls and thus, escaped full-scale conversion or demolition during the Inquisition.

Alhambra is a King’s Palace built by Muhammad I (1237-1273), founder of the Nasrid dynasty. He installed his court on the hills of Sabika in 1238 and started construction of Alhambra. It was completed by Muhammad V (1354-59/1362-91) with the completion of the Courtyard of the Lions.

When the last ruling Monarch of the Nasrids, Muhammad XII/Boabdil, surrendered to Catholic Monarchs Ferdinand and Isabella in 1492, they conducted extensive repairs and alterations and installed the Royal House. Today it has become a major tourist attraction in Spain, attracting approximately 6,000 tourists each day. 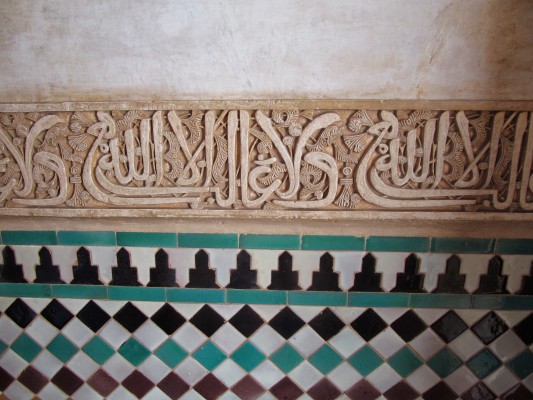 Quranic verses in Kufi script, and the famous Nasrid phrase Wala Ghaliba Illallah, is found in many corners on the walls and lends a silent messages of Tauheed to the visitors. When Muhammad I entered Granada as a conqueror, he was hailed as “Victor”, so he replied “Victory Lies only with Allah”. To emphasize this, he had it engraved all over the walls. 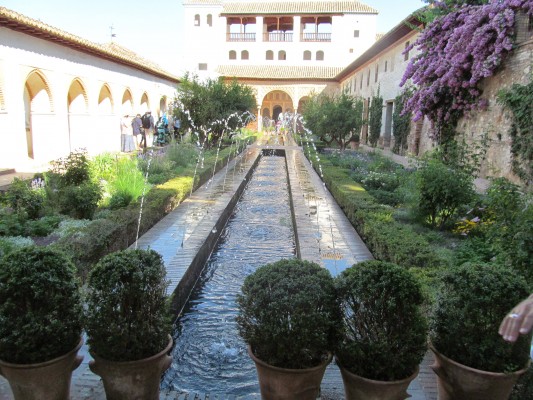 Alhambra is a unique marvel of engineering. Its construction mechanisms, without electricity or modern machinery, provided important lessons for engineers over time. For example, river water from the mountain was diverted to flow under the palace, emulating the Quranic description of Jannat with rivers flowing underneath. This created a cooling and soothing palace climate with fountain waters rising through the use of gravity through numerous palace courtyards and gardens. It boggles the mind of every visitor, to reflect on the technical knowledge of that time among the people.

Tours are conducted by official guides. We were fortunate to have a Muslim guide for half of our group and another Spanish guide for the other half. Both guides gave us good background information on Islamic history. It takes about three to four hours to tour the palace, and consists of about 5km of walking.

We returned to the hotel for our afternoon siesta. Our hotel, located in the heart of the city, was beside a public square where Muslims and Jews were burnt at the stake, and it is where a number of them were buried during the Inquisition. Both Muslims and Jews had to prove their conversion by eating pork and hanging it in their kitchen among other things which were meant to humiliate and degrade.

In the evening we went to the first Spanish mosque — Mezquita de Granada — built after 500 years. This is the first mosque built for native Spanish Muslims since the Reconquista. It took 22 years for the Granada city authorities to grant permission for the building, but local Spanish opposition to the project has subsided. The local community now welcomes the positive effects the Masjid has brought to the area.

An article describing the initiation of the Masjid and the controversy surrounding it describes how the roots of many Spaniards lead back to Islam: “Looking out across the Sierra Nevada mountains and the Alhambra, Abdul Haqq, 42, a Basque who converted to Islam 12 years ago, said: ‘Granada has historically been the capital of European Islam. Some people convert because of their search for their roots – others like me joined as a matter of faith.’” (Wilkinson, 2003, p. 1) 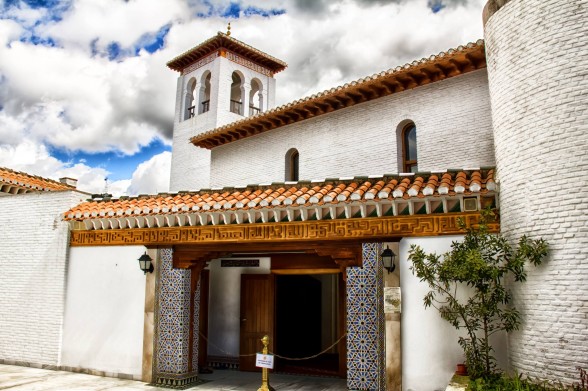 Mezquita de Granada is located on a hill that presents a very picturesque view of the city and the Alhambra. Permission for the construction of this Masjid was given with a condition to keep the courtyard open to public. This proved to be a blessing for Muslims as thousands of visitors that come to this place also see the Masjid and hear Adhan for prayers, especially for Maghreb and Isha.

After praying Maghreb Salat, we went to Plaza Nueva (New Square), where a lot of Muslim restaurants and eateries are to be found.

The next afternoon, we set out for Alpujarra, along the route of the Nasrids. On the way, we stopped at the old Muslim bridge – the Nasrid Bridge – and the Muslim fort/castle which is the location of one of the last stands made by the Muslims of Alpujjara. As our bus drove up the mountainous, winding road, it provided a beautiful view from the top. We arrived at Maghreb time in Alpujjara. As the Masjid was very small and could not accommodate all of us, we had to take turns for Salat.

After Salat, we were hosted for dinner by a Spanish Muslim revert in his restaurant. We thus ended our Andalusian Heritage tour and departed for our return journey.

The tour host Tariq Mahmoud was our main guide and I found him to be very knowledgeable about Muslim Spain. Dr. Shaikh Abdullah Hakim Quick, a scholar and historian provided not only history, but also spiritually uplifting lectures every day.

It was overwhelming and eye-opening for many of us. It brought joy for the marvelous achievements of Muslim rule, but also brought tears to our eyes for the way Muslims suffered and lost foothold in Western Europe.

The obvious question is why? Reading the history tells us that disunity resulting in family rivalry and in-fighting for power destroyed what was the most civilized model kingdom on earth. Muslims today need to reflect on Andalusian and other Islamic history and learn lessons for distinguishing friends from enemies, uniting against Islamophobia, and practicing our faith in its entirety.