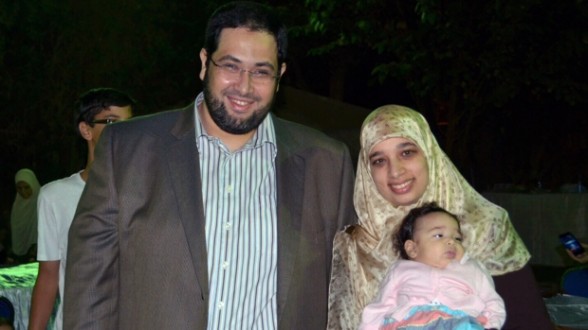 (July 15, 2014) – Today, prominent Canadians stood alongside Canadian Sarah Attia in a press conference at Parliament Hill  and presented an open letter to Prime Minister Stephen Harper about the situation of Khaled Al-Qazzaz.

RochTasse, Alex Neve, and Monia Mazigh, signatories of the letter, each shared aspects of the letter and all urged Prime Minister Harper to intervene and end the ordeal that Khaled, Sarah and their four children have lived through for the last 11 months.

“Thank you to the many Canadian lawyers, academics, authors, and activist [signatories] for your support and for standing alongside my family to call for an end to this injustice” said Sarah Attia. The names of the 129 leading Canadians and 6 organizations who signed the letter can be found on the campaign web page.

“Make no mistake; silence on the part of the Canadian government is not neutral. Canada’s failure to intervene at a political level risks sending a message that Canada is essentially unconcerned” says Alex Neve, Secretary General of Amnesty International Canada.

Khaled’s permanent resident status “may mean that it’s more difficult for Canada to gain access, it should not at all dictate what action Canada takes on the case, how clearly and forcefully Canada raises it, how regularly senior levels from the foreign minister, from the prime minister himself,” said Alex Neve.

In the open-letter signatories including Canadian academics, lawyers, professionals, authors, artists, celebrities, writers, thinkers, activists and organizations have collectively asserted that “we believe that Canada cannot be silent any longer.We are now calling upon you, Prime Minister, to take prompt and meaningful action.”

Dr. Mazigh, the wife of Maher Arar, a Canadian who was previously detained abroad, commented on Khaled’s 380-day long detention:. “Khaled Al-Qazzaz has been in solitary confinement for more than a year. Solitary confinement is the worst kind of psychological torture. My husband went through this ordeal and today he still bears the consequences. When the Canadian government of the time spoke with one strong voice to the Syrian voice my husband was released shortly after,” said Dr. Mazigh.

To The Right Honourable Stephen Harper, Prime Minister of Canada

We, the undersigned, are calling upon you as concerned Canadian citizens and organizations to use the full power of your office to demand the immediate release of Canadian permanent resident Khaled Al-Qazzaz who has been illegally detained in Egypt for over 365 days without charge and is in present danger of suffering a heart attack. He should have been promptly charged with a recognizable criminal offence or released.  One year is most certainly not prompt.  His illegal detention was, in fact, recently extended by an Egyptian court. Your intervention is critical in securing his immediate release and safe return home to Canada.

Khaled is the husband of Canadian citizen Sarah Attia and the father of four young Canadians: Abdelrahman (8), Amena (5), Fatema (4), and Tahrir (2). He was arrested on July 3, 2013 while working as an aide for former Egyptian President Mohamed Morsi who, as you know, was the first democratically elected leader in Egypt’s history. Khaled is currently incarcerated in the maximum-security Scorpion wing of Tora prison in Cairo in a cell the size of a broom-closet, in heat in excess of 45°C.

Khaled’s situation is grave and urgent. In addition to the appalling conditions of his solitary confinement, his health is deteriorating rapidly. A recent doctor’s report found that his solitary confinement has caused, and is exacerbating, numerous medical problems. Conditions in his cell are causing pressure on nerves in his left arm, which has now become partially immobile. Extremely difficult sleeping conditions have resulted in significant knee pain, which could lead to long-term disability or surgery.  The most recent information we have received regarding Khaled’s condition has revealed significant compression of his spinal cord which is causing him profound weakness. If this is not treated with surgery immediately, it may result in paraplegia. Furthermore, his weakness is being exacerbated by the extreme temperatures in which he is being held, which when combined with the significant humidity are causing heat exhaustion and significant dehydration and may lead to acute renal failure.

As you are well aware, The Universal Declaration of Human Rights states that no one may be subjected to arbitrary arrest, detention or imprisonment. In addition, international human rights standards require that detainees be charged, tried promptly and afforded a fair trial.

Every nation has an obligation to encourage other nations to respect international laws and norms.

This case has received significant public and political attention in the last six months. Its facts have become a matter of public record. We have attached a letter from Khaled that was smuggled out of prison and printed in the New York Times on June 28, 2014. In it, Khaled explains why he chose to return to Egypt to strive for its educational, social and economic welfare. He explains his beliefs, ideology and motivations and asks why the world has been so silent on his status. (Link to New York Times Op-Ed)

We believe that Canada cannot be silent any longer.

We are now calling upon you, Prime Minister, to take prompt and meaningful action.

We live in a country whose profound commitment to human rights has always been recognized by the international community. It is with the knowledge of and pride in this commitment that we raise Khaled’s case with you. We have every expectation that you will remain true to our proud legacy.

Prime Minister, we ask that you intervene vigorously on behalf of Khaled’s wife, Sarah, and their four young children. As Canadians, they have every expectation that you will recognize this case as a travesty of justice and do everything in your power to secure his immediate return and re-unite Khaled with his family.

Tamara Lorincz – Board Member, Canadian Voice of Women for Peace

Fred A. Reed – Author and Translator

Thomas Woodley – President, Canadians for Justice and Peace in the Middle East