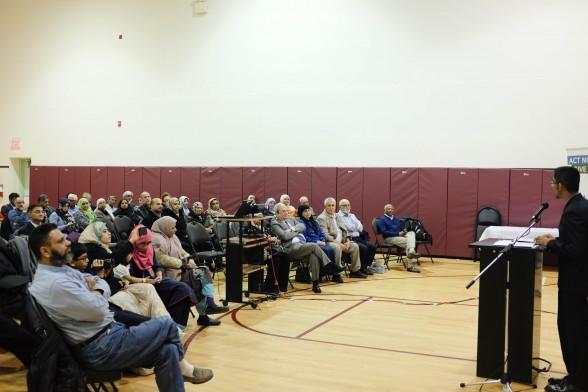 (December 8, 2014) – Youths expressed their appreciation and gratitude for the support of the Olive Tree Foundation (OTF) at the 2014 Awards Appreciation Ceremony held by the organization on November 30 at the Sayeda Khadija Centre in Mississauga.

“I am very grateful to the Olive Tree Foundation for this prestigious award and would like to thank OTF for encouraging Muslim youths in the community for the hidden skills they possess and for this wonderful recognition,” said Syed Saad Ejaz, recipient of the 2014 Mohamed & Opheerah Nasir Leadership Scholarship. “It’s a great honor and privilege to be an Olive Tree Foundation Leadership Scholarship award recipient.”

Syed Saad Ejaz graduated from ISNA High School in Mississauga and was chosen as the scholarship recipient for his exceptional leadership qualities, social conscience and academic achievement.

Momin Daanish of Glenforest Secondary School, Mississauga was awarded the 2014 Academic Excellence Bursary for excelling in his academic studies in high school.

Komal Javed of White Oaks Secondary School, Oakville was recognized for taking consistent action to make a positive impact on the larger community with the 2014 Youth Action Bursary.

The recipient of the 2014 Abdullah ibn Umm Makhtum Student Bursary was Hisham Mohammad of O’Neill Collegiate and Vocational Institute, Oshawa. The bursary, named after a blind companion of the Prophet Muhammad, peace be on him, was awarded to Hisham Mohammad for overcoming challenges and barriers faced as a result of his disability and for his in-school achievements and community involvement.

Samiyah Khan of Longfields Davidson Heights Secondary School, Ottawa was awarded the 2014 Women’s Educational Bursary as an exceptional female who consistently demonstrated that she is a high achiever in both academics and extracurricular activities.

“In the spirit of this award, I would like to encourage all the youths to believe in volunteerism – we are the future leaders of tomorrow,” Syed Saad Ejaz, recipient of the 2014 Mohamed & Opheerah Nasir Leadership Scholarship, told the audience at the awards ceremony. “In Canada, volunteerism is regarded as a highly noble duty. It not only brings you an inner satisfaction by helping others, but also reinforces the virtues of sincerity, compassion and better understanding of human lives.”

The Olive Tree Foundation is a philanthropic foundation that promotes community development through the collection of endowed funds and charitable contributions to fund services for the long-term benefit of the community.

Donors were also acknowledged by the Foundation at the Awards event.

The audience was told that among the pioneer donors to OTF in 2005 were a group of Muslims who wanted to honor the memory of their Qur’an and Islamic Studies teacher in their home country of Guyana.

“They established a memorial fund, the ‘Azeem Khan Memorial Fund’, that will leave a legacy for their teacher and be an ongoing charity for him,” said Muneeb Nasir.

“Donors who establish endowments have the foresight to plant the seed,” he added. “They are giving a perpetual gift that will be a lasting legacy.”