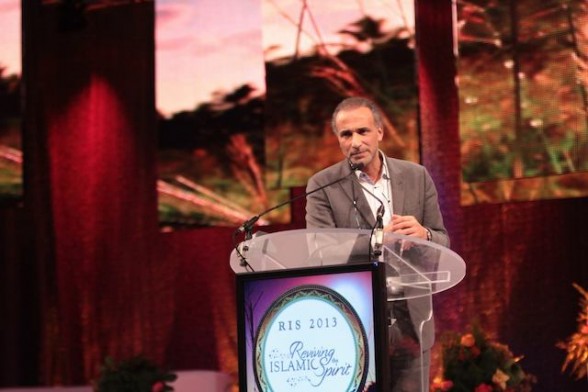 (December 28, 2013) – The Reviving the Islamic Spirit Convention got underway on Friday in Toronto with an inspiring Friday Sermon delivered by Ustadh Nouman Ali Khan to thousands of people who traveled from across North America and beyond to attend the landmark annual gathering.

“These conferences are an exercise on how to live as a community,” Ustadh Nouman Ali Khan told the audience.

Nouman Ali Khan is the founder and CEO of Bayyinah and serves as a lead instructor for several traveling seminars. He brought his unique style of explaining the Qur’anic message to a session later in the evening in which he reflected on the well-known Verse of Light in the Qur’an.

“Reality, as we know it around us, is irrelevant in the absence of light,” said Ustadh Nouman Ali Khan. “Light of Allah brings our hearts to life.”

Organizers are expecting 20,000 attendees to attend the convention that will run over the weekend at the Metro Toronto Convention Center in the heart of downtown Toronto.

A main theme that ran throughout the opening day’s sessions was the importance for Muslims to turn to the Qur’an and seek guidance and solace from its message.

Yasmin Mojahed, popular for her inspirational speeches and writing, spoke eloquently on the topic, ‘Purposeless Pain or Painful Purpose? With Hardship Comes Ease.’

“It is through hardships that we are purified,” she told a rapt audience. “If you have refuge in Allah, you will have paradise inside.”

“The paradise inside cannot be taken away,” she added. 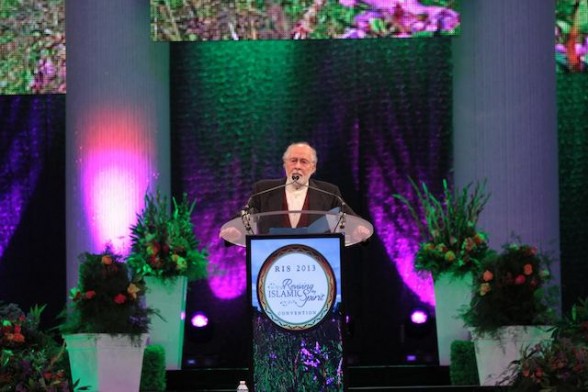 A major highlight of the evening’s program was an address by Dr. Seyyed Hossein Nasr on the topic, ‘A World Out of Balance: When Extremes Prevail.’

Seyyed Hossein Nasr, currently University Professor of Islamic Studies at the George Washington University, Washington D.C. is one of the most important and foremost scholars of Islamic, Religious and Comparative Studies in the world today.

“Once, in the soul, the centre is lost, society moves toward the periphery, the extremes,” he noted. “All of religion is to bring us back to the Centre.”

“Our tradition has always supported the middle way,” he added.

Speaking on the theme of ‘Changing Our Condition’, Professor Tariq Ramadan issued an impassioned call to the attendees.

“As Muslims, we have the duty to liberate ourselves,” he said. “I am calling for a jihad of meaning.”

“We have to reconcile ourselves with the meaning of things,” he added.

Named by Time magazine as one of the 100 most important innovators of the century, Professor Tariq Ramadan is a leading Muslim scholar, with a large following especially among young European and American Muslims.